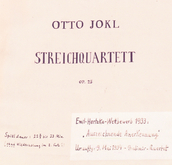 News, In the Spotlight

Does copyright law frustrate the revival of ‘repressed‘* music?
A contribution to the discussion by Werner Herbers, Amsterdam

Museums and libraries are obliged to adequately safekeep their treasures and make them accessible to the public.
Art galleries conserve their collections under correct climatological conditions and exhibit them in spaces open to the public.
The same is true of libraries, in whose reading rooms books may be read.
This does not apply in the same way to music libraries, whose music is made ‘accessible‘ to the public only on condition that it is to be performed. In my opinion, music libraries should therefore be obliged to take the necessary measures to enable a composition to be used by the public, i.e. any legal obstacles should be removed so that musicians can indeed perform it.

In connection with a new CD by my Ebony Band I went in search of string quartets by two pupils of Alban Berg, Julius Schloss (1902-1973) and Otto Jokl (1891-1963), who both emigrated via Shanghai to the USA, where they died as American citizens.

The personal belongings of Schloss are kept in the McGill University Library in Montréal (Canada). In response to my request, copies of two quartets were sent forthwith and without expense.

Jokl’s belongings are kept by the Bayerischen Staatsbibliothek (BSB). My request of December 2014 met with the following answer:
If you require reproductions (digitalised), on the grounds of copyright protection of works by Jokl, who died in 1963, permission must really be given by a natural person, with whom, however, we have no contact. Do you have any relevant information? The GEMA** may be able to help.

I proceeded to approach some twelve international copyright organisations, including the GEMA/AKM/BMI/ASCAP/Simon Wiesenthal Centre (Los Angeles/Vienna)/Leo Baeck Institute (New York)/Israelitische Kultus Gemeinde (Vienna) – but without result. Only one thing emerged, and that was that Jokl died childless (in New York).

The BSB was adamant. What is more, my offer to sign a declaration guaranteeing to honour any claims by rightful claimants (as is customary when publishing anonymous photographs) was not accepted.

The lady at the head of the manuscript department was most embarassed by this situation, and even went so far as to confront her organisation’s legal expert with the fact that the composer was thus being silenced for the second time!

The BSB (in a letter from the general director, June 2016), justified its policy as follows:
As an organisation of the free state of Bavaria, and, concretely as a ‘central authority’ [Mittelbehörde], the BSB is obliged to comply with legal stipulations and to respect copyright protection.
[....]
I am sorry if my declaration sounds ‘bureaucratic‘ and hardly ‘user friendly‘, but laws in force simply prescribe a stringent operational framework. One cannot burden the BSB with the fundamental question of the effort of a declaration of rights concerning protected works; such a service would be beyond the resources of the library.

It is clear that copyright law must be respected. It guarantees the composer his due fees and protects him against undesired adaptations of his music. One must be cautious, however, that this law does not harm a far greater interest of the composer, namely the performance of his music.

A piece of music that cannot be performed is just as ‘invisible’ as a painting in a museum depot.

When music by a Jewish composer banished by Hitler is concerned, it is my opinion that a music library, and a German one in particular, must therefore do all that is in its power to facilitate the performance of this protected music. Thorough investigation of any possible surviving claimants or heirs should be undertaken; if none are found, a more flexible and bold approach to copyright should be adopted. In so doing it should be borne in mind that, in the eventuality of a financial claim, the amounts involved are tiny. A dodecaphonic string quartet by an entirely unknown composer does not even have - in terms of money - the value of a Wilhelm Wagenfeld lamp.

The BSB is the custodian of 355 extensive legacies and personal collections in the field of music alone. A large part is copyright protected.

One of these legacies is from Wolfgang Fraenkel (1897-1983), who also fled to the USA via Shanghai and to whom, together with Julius Schloss, a concert of musica reanimata was devoted in June 2010.

As in the case of Otto Jokl, the BSB has not a single contact address of any claimant relating to Wolfgang Fraenkel. What is more, he is not even registered with the GEMA. Who is supposed to find a heir or claimant?

It appears to me to be a matter of interest to find out more about how other libraries deal with this problem. I fear that the inflexible policy of the BSB is not an exception.

In the meantime, the ‘Jokl case‘ has been solved.After a long search it turned out that Michael Haas, one-time recording producer of the CD series of ’degenerate’ Musik (Decca 1993-2000), had in his archive the name of a great-nephew of Otto Jokl, resident in Jerusalem. He was most enthusiastic about the rediscovery of his relative, and without hesitation gave me unconditional permission to use his music.  Upon payment of € 340.- the BSB sent me copies of both string quartets by Otto Jokl, and very shortly they will be heard once more.

Jokl’s heir was quick to wave the few cents due as copyright fee!

* In German, ‘repressed‘ music refers to music suppressed and forbidden by the Nazis (otherwise referred to as ‘degenerate‘ music).