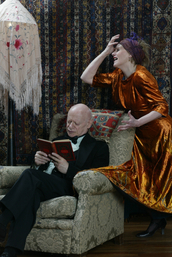 In the Spotlight, News

A fuss has recently been caused by a proposal to perform the musico-dramatic work Egon und Emilie by Ernst Toch in Toronto (Canada).

What is it all about?

A text by the German poet Christian Morgenstern, who died in 1914(!), forms the basis of Ernst Toch's mini-opera Egon und Emilie, kein Familiendrama, composed in1928 for coloratura soprano (Emilie), seven wind instruments and a speaker (Egon). In his text, set so brilliantly to music by Toch, Morgenstern ridicules the absurdity of the phenomenon of opera by leaving unanswered Emilie's sung declaration of love to her partner. It is a completely over-the-top stereotype of a hysterically emotional woman face to face with the down-to-earthness of a so-called sensible man.

Despite the fact that the work is one and all irony and parody, doubt has arisen in Canada as to whether it can be performed in this age of feminism. The director of the Toronto conservatory even reacted to the proposal with an unequivocal "no way"!

If this piece, so clearly a parody, can no longer be staged, one wonders what is to be the fate of so much opera repertoire, not to mention Tintin?