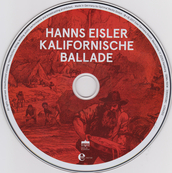 In the Spotlight, News

These days the German label 'Berlin Classics' has released a cd with music, composed in the years 1929-1934, by Hanns Eisler. The cd consists of historic recordings from the early 1930s (with a.o. the singer Ernst Busch) and the late 1960s (with singer Gisela May). Also on this disc are a few live performances of the Ebony Band (from the early 1990s), playing theatermusic by Eisler.

An interesting aspect of this cd is the double performance of the 'Unterhaltungsmusik II - Potpourri über russische Volkslieder' ('Light music II - Medley of Russian Folksongs'), one from 1931 conducted by the composer and one by the Ebony Band under Werner Herbers.

Already before the official release of the cd, two very positive reviews appeared in the Netherlands, see 'Discography' on this (Ebony) site.