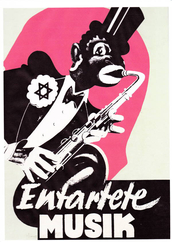 The term entartete Musik - degenerate music - was applied by the Nazis to all music that they considered to be morally and politically repugnant. Composers of such music were to be resisted and performances made impossible.

Origin of the term
The German romantic Friedrich Schlegel (1778-1829) employed the term entartete Kunst to express his contempt for the poetry of Late Antiquity. The writer and anarchist Max Nordau (1849-1923), a German Jew of Polish-Russian descent, gave the term entartet the meaning of moral degeneration, a symptom of disease of the human mind, in his work Entartung, published in 1882. He viewed the fin-de-siècle mood in Europe as indicative of an erroneous social development, and artistic movements such as Naturalism, Symbolism and Realism as "moral deficiency".
The word entartet became current before it was annexed by the Nazis to gun down anything that to their mind was not German to the core. In 1915, the painter Franz Marc used it to describe his lady friend the poetess Else Lasker-Schüler, in view of her fondness for the Bohemian life in the big and decadent city. Before long, the two were stamped as entartet themselves.
A most direct and evil meaning was given to the word by Wilhelm von Bode, one of Germany's most respected art historians and general director of the museums of Berlin. As far back as 1919, he advocated an active role for the authorities in the battle against perversion and vulgarity in art, and against "the swamp of degeneration" in which film and dance threatened to end up under the influence of Expressionism and Dadaism.
Although concepts of Entartete Kunst and Entartete Musik were never legally defined, in the course of the 1920s the words were used in an increasingly tyrannical and arbitrary manner. Only in 1937-38 did these terms become established once and for all, when the Nazis used them as titles of exhibitions in Munich (plastic arts) and Düsseldorf (music) aimed to demonstrate to the public what a perverse and insane swindle modern art had become. The Munich exhibition attracted three times as many visitors (up to 40,000 a day) as a simultaneous exhibition of 'pure art' agreeable to the Nazis. This was explained away as a demonstration of solidarity with national-socialist ideology.

Developments during the Weimar Republic (1918-1933)
The general situation in Germany after World War I was turbulent: agonising hunger, paralysing inflation, a smouldering civil war, street fighting and attacks, but also excessive pleasure-seeking and explosive creativity among artists, all these were the order of the day. The end of war brought an unparalleled cultural revival, with Berlin at the very centre. Countless new initiatives were undertaken, supported by a public thirsting after culture. Many important ideas and currents from the 1910s, whose development had stagnated during the war, now broke through.
Artistic movements such as Expressionism, Dadaism, the Modern Movement, Russian Constructivism, the music of the Second Viennese School of Arnold Schönberg, and the architecture of Poelzig, Von der Rohe, Gropius and Le Corbusier achieved wide acceptance for the first time and consequently flourished. Policy makers, organisers and wealthy private sponsors set up productions and festivals, purchased and ran theatres and cinemas, started film and recording companies, and commissioned artists or offered them support. Commissions were also given by the new medium of radio broadcasting, which, after the first experimental transmissions in 1919-20, expanded enormously in the 1920s. In 1931, nearly half of the Berlin households possessed a radio.
Artists launched new journals, formed music and theatre companies, and joined forces in collectives in order to effectively propagate social ideas and interests. In the ballet world too a new style arose, the so-called Ausdruckstanz, a free form of dance that was to become the basis of later modern groups such as that of Pina Bausch and the Nederlands Dans Theater.
The academic world too was full of innovation, with the theories of physicists such as Einstein and Bohr, the sociologist Max Weber and the psychoanalyst Freud. Students and followers of the latter, liberated from the stiffness of Vienna and the oppressive proximity of their tutor, founded an institute in Berlin in 1920 which quickly became the world's leading centre of psychoanalysis.
The Nazis were to put an end to all these activities.

Reactionary forces
Through disappointment about the lost war, and the penalties imposed by the victors as set down in 1919 in the extensive Treaty of Versailles (440 articles in 15 sections), nationalists among the German population became increasingly hateful towards all things foreign. The notion of an "internationalism hostile to the people" arose, and a belief in a "Jewish-Bolshevist conspiracy aimed to keep Germany in its place not only militarily and economically but also culturally", as the composer Hans Pfitzner put it in 1920. Pure and thoroughly German norms and values were to be maintained, defended and propagated; all that deviated, any new element, was seen as a threat to native culture and identity that could not be tolerated.
These norms and values related to the idiom, the musical or visual language (atonality, jazz influences / abstract and non-realistic painting), and the employment of everyday or commonplace subject matter. A classic example of degenerated music was the opera Maschinist Hopkins by the Viennese composer Max Brand (première in Duisburg, 1928): the plot concerns envy, corruption, espionage, murder, prostitution, revenge and exploitation of the worker, and is situated in hardly uplifting locations such as a factory building and a bar. Moreover, Brand employs various musical idioms including atonal music, jazz and black bottom, and futuristic machine noise. The opera was a sensational success.
In view of the fact that innovation and creativity are of vital importance to art and culture (Schönberg: “Kunst ist neue Kunst” - Art is new Art), conflicts were inevitable. Reactionary forces were quickly manifest: even the apolitical, non-Jewish poet/painter/cabaret artist Joachim Ringelnatz (1883-1934) was confronted by police actions from the early 1920s. His grotesque, tragic, humoristic and - to us - entirely innocent books of poetry were criticised as "mocking the bourgeoisie … endangering the moral development of children…and offending the sense of shame of normal people". The collections were siezed and the publisher was heavily fined. The German-Czech composer Erwin Schulhoff, who had moved to Germany in 1919, full of expectation because that's where "the action" was, gave up in 1923: finding the hatred towards foreigners to be unbearable, he returned to his birthplace Prague. In 1928, the governing body of the Berlin Academy of the Arts decreed that foreign music overran German concert programmes, and requested the Minister of Justice to take legal measures.
As the arts flourished, social conditions deteriorated, and further polarisation was inevitable. In the late 1920s, there were already countless cases of intimidation of artists and left-wing intellectuals. Even before Hitler officially came to power in 1933, theatres were forced to close, entertainers (including Ringelnatz) were forbidden to perform, certain repertoire was banned, and newspapers and magazines disappeared. Three months after the change of power, books by Gide, Remarque, Freud and more than 150 other authors were burnt in public for the first time.
The iconoclasm became a man-hunt. The artistic calling was no longer a way of life, but a question of survival. Of countless artists and intellectuals, mostly Jewish, who were unable to flee to safety in time, the fate is known. For thousands of non-Jews it was a different matter. A number survived the war by collaborating, whether or not out of conviction (the conductors Von Karajan and Böhm, the composer Egk), or by behaving as unobtrusively as possible (the composer Webern). Even passive resistance was tolerated, especially if it came from prominent persons such as the author Kästner or the composer Hartmann.
For many artists, emigration proved to be difficult or impossible, through lack of financial means or the necessary contacts. Various countries only admitted refugees if they could prove that they were self-supporting or had contacts who could guarantee their support.
A great number of artists who had had the fortune to emigrate, struck on bad times both financially and artistically. An example is Leopold Spinner (1906-1980), a pupil of Webern and a discerning composer, who for many years was a lathe operator in an English factory, conducting amateur choirs in the evenings and teaching talentless children the piano. Even the great Arnold Schönberg lived on the bread line until his death in the USA. For many, emigration formed a serious attack on their creative powers. As the composer Vladimir Vogel wrote: “Der Weg in die Schweiz war der Weg an einen sicheren Ort. Es war aber auch ein Weg ins Abseits” (the road to Switzerland was the road to a safe place. But it was also a road to an offside position).