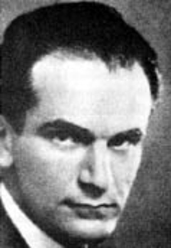 Norbert von Hannenheim, with full name Norbert Wolfgang Stephan Hann von Hannenheim (1898 Nagyszeben - 1945 in the Landeskrankenhaus Obrawalde near Międzyrzecz) was an Austro-Hungarian-born German composer. He is seen as one of the most brilliant later pupils of Arnold Schoenberg.
A member of the Saxon community in Transylvania, Hannenheim was born in the city of Nagyszeben (in German: Hermannstadt, present-day Sibiu). He visited the German High School in Hermannstadt and received private piano lessons. Hannenheim occupied himself with music since his childhood and occasionally wrote compositions as an autodidact. In 1916 he was scheduled to perform a movement of his piano sonata, but recruitement into the army prevented this. From his early times date some tonalic settings of poems, which he partly published himself.
He studied in Graz, Austria, from 1922 to 1923, and subsequently with Paul Graener in Leipzig. Here he composed pieces of chamber music for different ensembles, pieces for orchestra, one concerto for violin with chamber orchestra, one concerto for violoncello with chamber orchestra, one symphony for big orchestra in one movement and a concerto for big orchestra.
In 1925, the first of five sonatas for violin, were premièred in Hermannstadt and from that moment on, his works were performed frequently, in concerthalls and radiobroadcasts.
In 1928/29 he continued his composition studies with Alexander Jemnitz in Budapest. Hannenheim was then a pupil in Schoenberg's Master Class in Composition at the 'Akademie der Künste in Berlin' (1929 to 1932). Schoenberg regarded him highly, calling him "one of the most interesting personalities I have ever met". Perhaps Schoenberg was particularly impressed by Hannenheim, because "he was nearly the only one, who would contradict him" (Erich Schmid).
Hannenheim was a workaholic and didn't do side-lines like his fellow-students. Therefore he was pressed for money all the time and when he wasn't working, he stayed in bed to save energy and food. He also started to get psychological problems and was hospitalised several times.
In 1932 he won the "Mendelssohn Staatspreis". His Second Pianoconcerto with small orchestra in one movement was very successful and was broadcast by many radio stations all over the world. Together with his colleague Peter Schacht, he won the "Emil Hertzka-Preis" in 1933.
The "Dritte Reich" ended his carrier. He had only few concerts. But works of his were performed as a “Roumanian” composer, at pre-World War II ISCM Festivals (as a Romanian composer, since the ISCM was formally proscribed by the Nazi German musical authorities). A planned performance of two movements of his Seventh Symphony by the Berlin Philharmonic under Erich Kleiber, was cancelled at last minute.
From the beginning of the Second World War, we know very little about Hannenheim. It was long believed that Hannenheim perished in an Allied air raid on Berlin and that all his scores were destroyed, but numerous songs, piano sonatas and string quartets have come to light in recent years. And it now appears that Hannenheim, who had intermittent but acute psychological problems, was admitted into a German psychiatric hospital in Berlin in 1944 and then into the Euthanasia hospital Obrawalde near Międzyrzecz (today Poland). He survived the Nazi regime, which was exceptional since between 7000-18.000 patients of the Obrawalda Hospital were killed by the nazis, but died about for months later.
When we started our research in 1990, only two early works by Hannenheim seemed to have survived. By now about 45 out of more than 230 pieces, are known. The others were destroyed in the chaos of the war's end, are forgotten or were burned under delusion by Hannenheim himself.
The Ebony Band played several works of Norbert von Hannenheim.