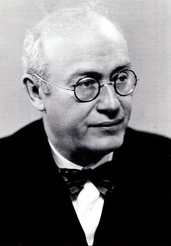 Rudolf Karel (Pilsen 1880 - Theresienstadt 1945) was son of a poor railway employee. He studied composition from 1899 to 1904 with Antonín Dvořák and organ with Josef Klička in Prague.
In Prague, he took part in the resistance and in March 1943 was arrested. After being interned at Pankrác for two years (1943–1945) Karel was sent to Theresienstadt concentration camp (often used as a transit point to Auschwitz but used as the "model camp" where the arts were to some extent tolerated; a number of artists and composers, among the latter Pavel Haas, Viktor Ullmann, Hans Krása and Gideon Klein also arrived there), where after one month he died of dysentery.
It was in a cell at Terezín that he worked on his five act fairy-tale opera Three Hairs of the Wise Old Man, composing it on toilet paper using pencil or medicinal charcoal. The 240 sheets containing a detailed sketch of the opera was secretly passed to a friendly warden. The orchestrations were completed after his death and from his notes by his pupil Zbynek Vostrak.
His several-times performed (and recorded) nonet (though left incomplete at his death) was composed (what there was of it) between January and February 1945. (It was premiered in an orchestration/completion by František Hertl for a premiere in December 1945.