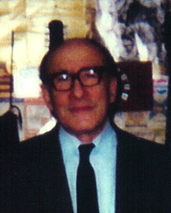 Philipp Herschkowitz (Romanian: Filip Herşcovici; Russian: Филипп Гершкович, Filipp Gershkovich) (September 7, 1906 – January 5, 1989) was a Romanian-born composer and music theorist, pupil of Alban Berg and Anton Webern, who spent 47 years, from 1940 to 1987, in the Soviet Union.
Born to a Jewish family in Iaşi, he graduated from the conservatory in the city in 1927 and entered the Music Academy in Vienna, Austria, where he studied with Josef Marx. Then he studied privately with Berg (1928–1931), and with Webern (1934-1939). He left Nazi German-occupied Austria and arrived in the Soviet Union in 1940, settling first in Chernovtsy, which he left on June 22, 1941 at the beginning of the German invasion, and then moving to Tashkent (in the Uzbek SSR) where he lived until 1944.
He settled in Moscow in 1946, where we began to teach privately, exerting a major influence on several generations of Russian musicians, including leading figures of the so called "Underground division". Among these were the composers Andrei Volkonsky, Edison Denisov, Alfred Schnittke, Sofia Gubaidulina, Nikolai Karetnikov, Boris Tishchenko, Valentin Silvestrov, Leonid Hrabovsky, Vyacheslav Artyomov, Vladimir Dashkevich, Alexander Voustin, Vladislav Shoot, Viktor Suslin, Dmitri Smirnov, Elena Firsova, Leonid Gofman; the musicologists Mikhail Druskin, Natan Fishman, Yuri Kholopov, and many others.
Herschkowitz was one of the most important pupils of Webern, and devoted his life to the understanding and development of his teacher's ideas. He was interested in exploring and creating a theoretical foundation to Webern's musical thought. He focussed on the analysis of the music of the great masters and in particular on Beethoven. The essence of this approach lies in the exploration of musical material in terms of the opposition between two fundamental categories: Fest ("fixed") and Locker ("floating").
By the invitation of the Alban-Berg-Stiftung, he returned to Vienna in 1987 — he died there two years later. The four volumes of his book On music that contain the essence of his teaching were edited and published by his widow L. Herschkowitz in Moscow in 1991–1997.
Almost all surviving compositions by Herschkowitz date from after 1945.