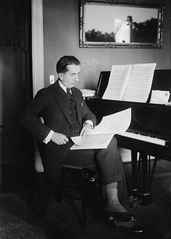 (b Turin, 25 July 1883; d Rome, 5 March 1947). Italian composer. In 1896 he was sent to Paris, where he studied with Fauré at the Conservatoire and became a friend of Enesco and Ravel. His musical enthusiasms, for Debussy, the Russian nationalists, Strauss and Mahler, are evident in the works of his ‘first manner’ (up to 1913), which include two symphonies, songs and piano pieces. But he felt a need to return to Italy, and in 1915 took a post at the Liceo di S Cecilia in Rome. There, as conductor, composer and organizer, he was an active propagandist for contemporary music; for since 1913 he had opened himself to the influences of Schoenberg, Stravinsky and Bartók and to new developments in the visual arts. Some works of this period have an ominous stillness (Notte di maggio for voice and orchestra, 1913; L′adieu à la vie for voice and piano, 1915; A notte alta for piano, 1917); others refer explicitly to the experience of war (Pagine di guerra for piano duet, 1915; Elegia eroica for orchestra, 1916). There is also a wrily humorous vein in such pieces as Pupazzetti for piano duet (1915) and the wilfully grotesque, fiercely dissonant Piano Sonatina (1916). The ‘second manner’ disappeared, however, c 1920, and he became a neo-classicist, works of this period including the Concerto romano for organ, brass, timpani and strings (1926), Scarlattiana for piano and small orchestra (also 1926) and the opera La donna serpente (1928-31, after Gozzi). Some late works, including the Concerto for piano, percussion and strings (1943) and the large-scale Missa solemnis (1944), suggest a move towards quasi-serial chromaticism. He was the most influential figure in Italian music between the two world wars.
Source: Grove Music Encyclopedia