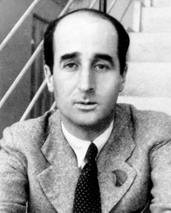 Schöne Geschichten can be viewed as Wolpe's contribution to the new genre of the Zeitoper, which caused such a stir in the second half of the 1920s with pieces like Jonny spielt auf (Krenek), Neues vom Tage (Hindemith) and Mahagonny (Weill). Today, Schöne Geschichten would be described as music theatre.
Wolpe himself said that the piece was intended to be played on "Andeutungs-Bühnen", i.e. locations without a proper decor or backdrop. The score includes scenic advice by Wolpe's great love Friedl Dicker, a Viennese visual artist affiliated with the Bauhaus, who had prompted the idea of Schöne Geschichten.
The work features seven cabaret-like scenes [#of misschien tableaus?] which send up serious subjects including learning ("Three times seven is twenty-one, or at the most twenty-two"), religion, justice, culture, love, philosophy and patriotism. The music is written for a 'defective' jazz band in an atonal idiom exuding the spirit of Alban Berg. But the choice of instruments, effects such as glissandos and slap tonguing for the saxes, and all sorts of mutes for the brass are indicative of Wolpe's affinity with the other 'new' music: jazz. In reality the music to these 'nice' [#mooie ... wat bedoel je??creative, imaginative, colourful??]stories sounds like free-jazz before the term was coined. Unfortunately, Wolpe never heard the work performed. After we found the almost illegible manuscript in the New York Public Library in the early 1990s the Ebony Band gave the world premiere in 1993 in the Netherlands. The work was issued by DECCA in 2000 in its series of degenerate music.

Schöne Geschichten pianoscore, part V : Love, or the tale of the piece of paper 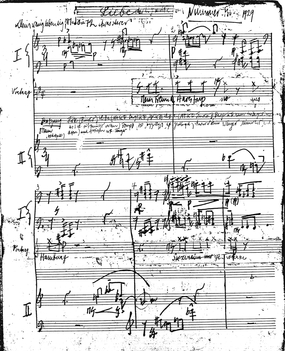