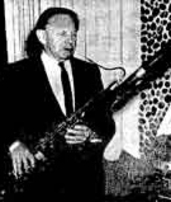 Adolph Weiss (Baltimore, Maryland, 12 November 1891 – Van Nuys, California, 21 February 1971), the son of German emigrants, was an American composer, bassoonist and conductor. He played in various orchestras from an early age.
He was the first (and only) American to study in Europe with Schönberg, subsequently introducing his knowledge of 12-note technique in America “at a time when it was either unknown entirely or badly misunderstood" (Henry Cowell).
Weiss was advised to study with Schönberg by Edgar Varèse. He went to Vienna and was accepted, and shortly afterwards he followed his teacher to Berlin, where he took part in Schönberg’s ‘Meisterklasse’ until 1929.
After returning to the USA, Weiss continued to occupy himself intensively with the principles of Schönberg. He submitted several new works to him via his friend and fellow pupil Roberto Gerhard, who stayed on longer in Berlin.
In his further career, Weiss remained a great advocate of contemporary music in general and of Schönberg in particular. He did this as a performer, translator (of Schönberg’s Harmonielehre among other things), secretary of the Pan American Association of Composers, and as associate of his friend Henry Cowell on the board of the New Music Edition.
WH