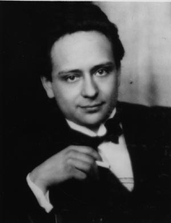 Viktor Ullmann was born on 1 January 1898 in Austrian Silesia (now Poland). His Jewish father was an Austrian officer. From the age of ten Ullmann lived in Vienna, studying music theory with Dr Jozef Polnauer and piano with Eduard Steuermann. In 1918 he entered the composition class of Arnold Schönberg, and on the composer's recommendation he joined the founding committee of the Verein für musikalische Privataufführungen, the private society formed by Schönberg's circle, where contemporary music (mostly for ensemble) by himself and others was performed.
In 1919 Ullmann married Martha Koref and settled in Prague, where he became choral director and choral répétiteur, later also conductor, at Alexander von Zemlinsky's Neue Deutsche Theater. In 1922 he was closely involved in the establishment of a Prague 'branch' of Schönberg's Viennese Verein.
During the 1920s Ullmann's compositions enjoyed increasing interest. He did not find a publisher, however, and partly for this reason the greater part of his music has been lost. His international breakthrough came after the performance of the piano version of his Schönberg Variations during the 1929 ISCM festival in Geneva.
From 1929-1931 Ullmann was employed as a conductor and composer by the Zurich Schauspielhaus. Subsequently he became fascinated by anthroposophy, abandoning his musical activities and opening an anthroposophical bookshop in Stuttgart with his new wife Anna Winternitz. When the Nazis came to power the shop was closed and he fled back to Prague, where he attended courses with Alois Hába and studied his microtonic music.
In 1934 Ullmann was awarded the internationally acknowledged Viennese Hertzka Prize for the orchestral version of his Schönberg Variations; two years later he won the prize again for his opera Der Sturz des Antichrist.
After the establishment of the Reichsprotektorat Böhmen und Mähren (1939), performance of Ullmann's music was prohibited, and his application to become a Czech citizen was refused. In 1942 he was deported to Theresienstadt, where he wrote many new pieces, including the frequently performed Der Kaiser von Atlantis. In 1944 his life came to an end in Auschwitz.