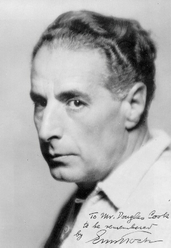 Ernst Toch (1887-1964) was born in Vienna, son of a Jewish merchant. At an early age, he taught himself the basic knowledge of music and composition. After winning the City of Frankfurt Mozart Prize (1906), he dropped out his medical studies to become a professional musician. At the Donaueschingen Festival 1924, works by Toch were performed which turned away from the romantic style and are characterised by the New Objectivity.
Toch moved to Berlin in 1929 and became one of the most frequently played living composers of his time. American performances of his works by the conductor Erich Kleiber and an invitation from the conductor Serge Koussevitzky to Boston, smoothed the way for his future in the New World. When the Nazi Party seized power (1933), Toch emigrated to London and in 1934 to New York. In 1940 he became U.S. citizen.
Although he was nominated three times for an Oscar (1935-44) and awarded a Pulitzer Prize (1957) and a Grammy (1960), Toch’s carreer suffered from “the echolessness of the vast American expanses”, as one of his fellow emigrant composers (Ernst Krenek) put it. He never succeeded in re-establishing his position as a composer in Europe after such a long absence. In Toch’s own words: “I am the most forgotten composer of the 20th century”.