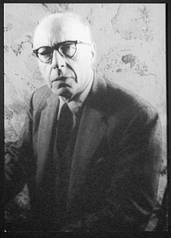 Georg Szell (Budapest, 7 June 1897 - Cleveland, 30 July 1970) was an American conductor of Hungarian birth. He made his debut as a pianist and composer at the age of ten in Vienna, were he grew up. Shortly afterwards he triumphed in London, where he was hailed as ‘the new Mozart’.
Szell studied piano and composition in Vienna, where his teachers included J.B. Foerster. Following his English debut he spent several months in Dresden attending a composition course directed by Max Reger.
Although initially uncertain about the path to follow, saying that he wished to become an ‘all-round musician’, from the age of thirteen he set his mind on conducting. Not until five years later did this dream become true after an encounter with Richard Strauss’s assistant Leo Blech, from whom Szell said that he learnt an immense amount. Strauss then took him under his care – he became répétiteur at the Berlin Opera – and from that moment there was no doubt about his destination. Composition made way for conducting, and it was this that brought Szell world fame. In 1930 he conducted American orchestras for the first time, followed in the Netherlands by the Residentie Orkest in The Hague (1933) and the Amsterdam Concertgebouw Orchestra (1936), and the New York NBC on the invitation of Arturo Toscanini in 1941. From 1946 until his death Szell was chief conductor of the Cleveland Orchestra, while until 1966 he also appeared as a regular guest conductor with the Amsterdam Concertgebouw Orchestra.
WH