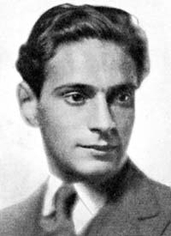 Hans Walter Süsskind (1 May 1913, Prague - 25 March 1980, Berkeley/California), was a Czech-British conductor, pianist and composer. He studied composition with Joseph Suk and Alois Hába, piano with Hoffmeister and orchestral conducting with Georg Szell (Zemlinsky’s successor at the Neue Deutsche Theater in Prague, 1927). In 1934 Süsskind became his assistant. He already had a considerable reputation as a performer of the piano works of Schönberg, Hindemith and Bartók, and he was the first to perform the complete piano oeuvre of Janácek. He was also an advocate of quarter-tone music, including that of Hába and Viktor Ullmann.
Besides his activities as a performing artist, Süsskind contributed articles to the music journal Rytmus (the bulletin of the artists’ society Přítomnost). He also played a key role in mediation between emigrants and the Prague art world.


Süsskind fled from Prague on 13 May 1939, two days before the German invasion and shortly after the closure of the Neue Deutsche Theater (1938). With the help of an English journalist and officials of the British Consulate he was able to settle in England, where he acquired the British nationality after the war.
Susskind (as a British subject he dropped the umlaut from his name) was principle conductor of the Scottish National Orchestra from 1945-1952. He later held similar positions, in addition to numerous guest conductorships, with the symphony orchestras of Melbourne and Toronto (1956-1965).

Süsskind only composed in his early years. His timeconsuming carreer as a conductor restrained him from composing.
The Ebony Band is in possession of a complete list of his (largely unpublished) works.
WH