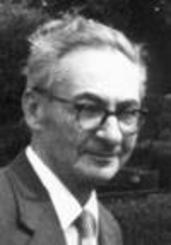 Leopold Spinner (26 April 1906 - 12 August 1980), born in the Austrian Lemberg (now Lviv, Ukraine), grew up in Vienna and received violin and piano lessons from an early age. He studied composition from 1926-1930 with Paul Amadeus Pisk (an early pupil of Schönberg), and his dissertation ‘The recitative in the Romantic opera until Wagner' marked the completion of a university study in musicology in 1931 .
After winning several composition prizes (including the Viennese Emil-Hertzka Prize), Spinner became a pupil of Anton Webernin 1935. Four years later, however, political circumstances forced him to leave Austria in 1939. He reached England via Belgium, but attempts to emigrate to the USA were unsuccessful.
From 1942-1946 Spinner earned his living as a lathe operator in a locomotive factory. Only from 1947 did he manage to find ‘musical’ work, initially as a private teacher and as a copyist with the London publisher Boosey & Hawkes, and from 1958 until his retirement in 1975 as an editor with the same company.
Spinner wrote analyses of works by Webern, but also of Bach and Beethoven, and a textbook on the twelve-note system; he also produced piano reductions of a number of orchestral works by Stravinsky.
Several reasons can be mentioned for the fact that the composer Spinner remained almost entirely unknown. On the one hand, his forced flight from Nazi Vienna at an age (33) when his works had hardly been performed in public, and the laborious lot that fell to him in his further life. On the other hand, the relatively inaccessible nature of his musical language, in which, for the inexperienced or superficial listener, the ‘construction’ seems to be of more importance than the ‘expressive’.
Sporadic polemics on these parameters, with particular reference to the music of Webern, unfortunately led to a situation in which the work of Webern-like composers enjoyed little public attention. Nonetheless, in Spinner’s musical language age-old, traditional musical values play an essential but subtle role. He composed cantatas, symphonies, sonatas and a Romance, and set texts by Heine, Möricke and Rilke, as well as 'Des Knaben Wunderhorn'. But the composer had to wait until 1953 before his first composition was officially printed and published. His music was mostly performed on special occasions such as ISCM festivals or concerts of modern music organised by colleague composers (including René Leibowitz in Paris).