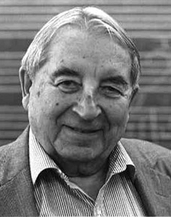 Nicolas Slonimsky (April 27 1894, St.Petersburg – December 25 1995, San Francisco) was a Russian born American composer, conductor, musician, music critic, lexicographer and author.
He was of Jewish origin, but his parents adopted the Orthodox faith after the birth of his older brother, and Nicolas was baptized in the Russian Orthodox Church. His maternal aunt, Isabelle Vengerova, was his first piano teacher.
Slonimsky was brought to the United States in 1923 by Vladimir Rosing to work as an accompanist in the newly formed Opera Department at the Eastman School of Music in Rochester, New York, where he continued his composition and conducting studies. After two years, he moved to Boston to work as a secretary of Serge Koussevitsky, the conductor of the Boston Symphony Orchetsra, for whom he had earlier worked as a rehearsal pianist in Paris (1921-23). During this time, Slonimsky taught music theory at the Boston Conservatory and the Malkin Conservatory and began to write music articles for The Boston Evening Transcript, The Christian Science Monitor and the magazine, The Etude.
In 1927, Slonimsky lead the Boston Chamber Orchestra, for which he solicited music from contemporary composers. Slonimsky was a great champion of contemporary music. He conducted the world premieres of Edgard Varèse's Ionisation for thirteen percussionists in 1933, of Charles Ives' Three Places in New England in 1931 and various other works by composers such as Chávez, Riegger and Cowell.
In 1958, Slonimsky took over the supervision of 'Baker's Biographical Dictionary of Musicians' and worked as head editor until 1992. He also wrote 'Music Since 1900',
a survey of almost every important musical event in the 20th century and 'The Lexicon of Musical Invective', a compilation of hilariously bad reviews by critics of composers since Beethoven's time. One of his best-known books is the 'Thesaurus of Scales and Melodic Patterns' (ISBN 0-8256-1449-X), which has influenced many jazz musicians and composers (including Frank Zappa, John Coltrane, John Adams, guitarist Buckethead, Paul Grabowsky, Jaco Pastorius, and Allan Holdsworth).
During the mid-1970s, Slonimsky was a frequent and favorite guest on Ara Guzelimian's weekly program on KUSC-FM, Los Angeles, sharing many of the fascinating stories and classical music lore he had accumulated over the years. In 1986, he made frequent Saturday afternoon visits to appear on the Doug Ordunio show, heard over KFAC-FM, Los Angeles. During one of the shows, a crew came out from the New York public television station, WNET, to film the entire show. Portions of this session were included in the "Aging" segment of the PBS Series The Mind. Slonimsky possessed a sly sense of humor, a trait he would exhibit on the various appearances he made on The Tonight Show with Johnny Carson. Late in life, he became a good friend of avant-garde composer and rock guitarist Frank Zappa and performed some of his own compositions at a Zappa concert in Santa Monica, California in 1981. Slonimsky named his cat Grody-to-the-Max after learning the phrase from Zappa's daughter Moon Zappa.
He wrote an autobiography, 'Perfect Pitch' (ISBN 0-1931-5155-3), filled with lively anecdotes about a great range of music figures of the 20th century, including his mentor, Serge Koussevitsky, Charles Ives, Henry Cowell, Igor Stravinsky, Frank Zappa, and many others.
Slonimsky died at age 101, on Christmas Day 1995.
Wikipedia/WH

Dear Mr. Herbers:
I wish ï could give you some leads on Dammert, but the name is
unfamiliar to me. Perhaps the only chance to find out what
happened to hin (he would be 8O years ofd now if he were still
living) is to inquire at the French Foreign Legion; they
probably keep records of their members
As to my own compositions, a list is found in my edition of
Bakerrs Bioqraphical Dictionarv of Musicians