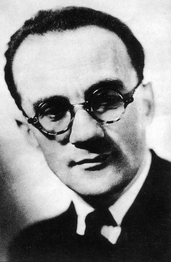 The Greek composer Nikos Skalkottas was born on Euboea on 8 March 1904 and died in Athens on 19 September 1949. He was born into a musical family, and as a five-year-old he already showed talent for the violin. At the age of sixteen he took his finals with gold distinction at the Athens Conservatory, and was awarded a grant enabling him to continue his studies in Berlin.
Much to his teacher’s sorrow, however, in 1924 Skalkottas decided to devote himself entirely to composition. He studied with the Busoni pupils Jarnach and Weill, among others, and in 1927 he was admitted to Arnold Schönberg’s masterclass at the 'Akademie der Künste', where he was to remain until 1933.
When the political situation in Berlin made his life there impossible, Skalkottas returned to his fatherland, leaving a large number of his manuscripts behind, some of which have never been recovered. In a letter to Erich Schmid, his fellow student Peter Schacht wrote : "We have shifted off Skalkottas with considerable effort to Athens, it was the only right thing for him. He lived only from debts and had gone so to seed that he could no longer work. Now he is at least with his parents and can recuperate for the time being”.
Back in Greece, Skalkottas had no other choice than to become an orchestral violinist. Modern music was non-existent, and as a composer he was entirely unknown. Consequently, he worked on his oeuvre in complete anonymity until his early, unexpected death. Only from the 1970s did Skalkottas begin to crop up on concert programmes. In the late 1990s the sublime New Hellenic String Quartet made recordings of his excellent chambermusic (BIS-CD-1074 Stereo/BIS-CD-1124 Stereo).