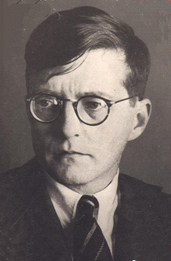 Dmitri Shostakovich (St. Petersburg, 1906 – Moscow, 9 August1975) was a Russian composer and pianist and was one of the most celebrated composers of the 20th century. Despite Shostakovich's exceptional talent, it was not until he was nine that he received his first formal piano lessons from his mother, a professional pianist.
In 1919, composer Alexander Glazunov considered the young Shostakovich ready to begin his studies at the Petrograd Conservatory, where he was director. The 19-year-old Shostakovich graduated with a First Symphony, an astonishing act of creative prodigy.
Shostakovich achieved fame in the Soviet Union under the patronage of Soviet chief of staff Mikhail Tukhachevsky, but later had a complex and difficult relationship with the government. Nevertheless, he received accolades and state awards and served in the Supreme Soviet of the RSFSR (1947–1962) and the Supreme Soviet of the Soviet Union (from 1962 until his death).

In 1936, Shostakovich fell from official favour. The year began with a series of attacks on him in 'Pravda' and the same paper slated a performance of his operatic grotesquerie, Lady Macbeth of the Mtensk District (attended by Stalin and the Politburo), "bedlam of noise". With the gun of the Soviet regime pointed at his head - and Stalin's finger effectively on the trigger - Shostakovich knew he had to produce a surefire winner. He withdrew his Fourth Symphony and wrote a Fifth one, which was exactly what the State wanted, with its universal message of triumph achieved out of adversity - it made him a public hero.


But in 1948, again, several composers, including Shostakovich and Prokofiev, were hauled over the coals by Pravda for "decadent formalism". In 1953 Shostakovich also composed his masterly Tenth Symphony, written - although no one was aware of it at the time - as a reaction against the Stalinist regime, and in the case of the vitriolic Scherzo, a sardonic portrait of Stalin.The constant psychological torture had taken its toll, and it seems that in 1960, following the completion of his Eighth String Quartet, Shostakovich contemplated suicide. In 1966 he suffered a heart attack from which he never fully recovered, and which hastened a preoccupation with death which is tangibly realised in his angst-ridden Fourteenth Symphony.
Shostakovich died a broken man.