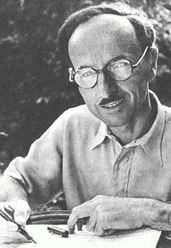 Mátyás György Seiber (4 May 1905 Budapest – 24 September 1960 Kruger National Park, South Africa) was a Hungarian-born composer who lived and worked in England from 1935 onward. He was killed in a car crash while on a lecture tour of South Africa.
Seiber studied in Budapest with Zoltán Kodály, with whom he toured Hungary collecting folk songs. He emigrated to England and became a British subject in 1935. From 1942, he was on the staff of Morley College in London, where he became a respected teacher of composition.
Although the ‘roots’ of Seiber, like his teacher Kodaly, lay in Hungarian (folk) music, he also had a wide interest in other types of music. As a student he had devoted himself to Arnold Schönberg, and he became acquainted with blues, rumba and tango on his travels along North, Central and South America as a cellist in a ship’s orchestra. In 1927 Seiber moved to Frankfurt, where his fondness for jazz resulted in his appointment as head of the first jazz department in a German conservatory, much to the annoyance of the Nazis, from whom he had to put up repeatedly with defamation in the press.
After Hitler came to power, a composer of dodecaphonic jazz was no longer certain of his life. Seiber emigrated to England and rose to a prominent place in musical life. He composed not only for the concert hall, but wrote several brilliant film scores, including one for Orwell’s 'Animal Farm'. He was also highly respected as a teacher.
W.H.