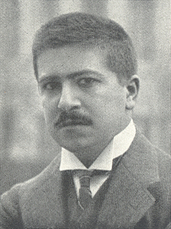 Artur Schnabel (17 April 1882, Liprik/Galicia - 15 August 1951, Axenstein/Switzerland), a pianist and composer, resided in Berlin from 1898 until Hitler’s seizure of power in 1933. His parents had moved to Vienna in 1884, and the young Artur commenced piano lessons when he was four and studied with Hans Schmitt from the age of six. Three years later he was accepted as a pupil of the internationally renowned piano pedagogue Theodor Leschetizky.
Schnabel first performed in Amsterdam in 1917, when he accompanied the violinist Carl Flesch in the small auditorium of the Concertgebouw. He was considered an unsurpassed performer of the great German classics from Mozart to Brahms, with a particular fondness for Schubert. He made the first – and widely acclaimed - gramophone recording of the complete Beethoven piano sonatas, and in 1927-1934 he played them all in five-day cycles in Berlin, London and New York. Schnabel was also renowned as a teacher, and Clifford Curzon and Claude Frank were among his pupils.
Artur Schnabel fled from Berlin in 1933, and, after living in London for several years, settled in the USA, where in 1944 he gained the American nationality. After the war he never performed again in Germany and Austria.

Throughout his life, Schnabel also occupied himself with composition, though his oeuvre is not large. His first piano pieces were published when he was sixteen; like the many lieder that he wrote at the age of twenty, they are in a post-romantic style close to Brahms and Strauss. For this reason he later dissociated himself from the compositions of his youth. He held Arnold Schönberg in high esteem (Schnabel had played the piano part in a performance of Pierrot Lunaire in 1924 in Berlin, when the cellist Gregor Piatigorski also took part), and under his influence he introduced new and abstract expressive means in his compositional style and thus freed himself from the musical conventions of tonality, harmony and rhythm. His great fame as a pianist, together with the complexity of his own music, account for the fact that the composer Schnabel has gone almost unnoticed, despite performances under the ‘fellow unknown composers’ Georg Szell and Dimitri Mitropoulos.
WH