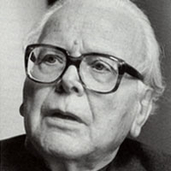 Erich Schmid (1 January 1907, Balsthal/CH - 7 December 2000, Zurich) studied composition, piano and orchestral conducting at the Hoch Konservatorium in Frankfurt (1927-1930). It was there that his first encounter with Arnold Schönberg took place, for the great master had travelled to the city to be present during preparations for the first performance of his opera Von heute auf. During his two-week stay, Schönberg attended the second half of a chamber music evening which included several of his own pieces. The programme before the interval had featured a violin sonatina by Erich Schmid. Schönberg had missed it, but after the concert and no little persuasion he was finally pulled away from a game of table tennis to listen to a second performance. He was so impressed that he invited Schmid to take lessons with him in Berlin, and indeed from 13 November 1930 to May 1931 Erich Schmid was Schönberg’s ‘master pupil’.
In 1933 Schmid decided to return to Switzerland following a political incident surrounding a concert he had conducted - including music of his own - in Frankfurt. He had less and less time for composition, since his conducting career occupied him entirely and brought him posts including that of chief conductor of the renowned Tonhalle Orchester of Zurich and the Radio-Orchester Beromünster. He also performed frequently abroad and had a permanent relation with the BBC orchestras, with which he conducted the British première of Schönberg’s Jakobsleiter.