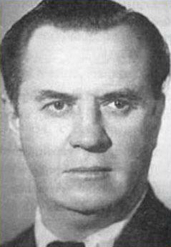 Gavriil Nikolayevich Popov (1904 Novocherkassk –  1972 Repino) grew up in an intellectual family where the upbringing included learning foreign languages and reading literature. He moved to Leningrad in 1922 and studied at the local conservatory with renowned teachers including Nikolaev (piano), Steinberg (theory) and Scherbachev. Popov was the latter's favourite pupil, and the two became close, supporting each other in difficult times until Scherbachev's death in 1952.
In the years 1922-24 Popov attended courses at the Polytechnical Institute (architecture) and the Institute for Music History.
In 1924-27 he worked as improviser-pianist at the Studio for Plastic Dance; he was also active as a piano soloist. Popov moved to Moscow in 1943, and died in Repino, a suburb of Leningrad.
It was said of Popov that he possessed the 'rough' talent of his contemporary Shostakovich. His early works, particularly the Septet (also known as the Chamber Symphony) and the First Symphony op. 7 (forbidden immediately after the premiere in 1935 and never performed again in Popov's lifetime) are impressive in their power and progressiveness. But after the 16th Party Congress in 1929, when modern music was banned and chamber music stamped as 'elite', Popov was forced to adapt his style. He went on to write 'social realistic' music and odes to the Russian people and their communist heroes, often based on folk tunes.
Popov wrote three operas (one of which is incomplete), seven symphonies and several other large-scale orchestral works as well as choral compositions. He composed little chamber music, but nearly forty film scores. In 1947 Popov received a state prize for his Third Symphony, but a year later he was again under heavy attack at the Party Congress.