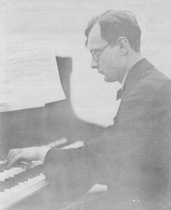 Miroslav Ponc ( 1902 Vysoké Mýto – 1976 Praag )
Miroslav Ponc’s thirst for adventure was manifest at an early age, when, in 1922, he requested Alois Hába to help him to be admitted to the Berlin conservatory.
Living on the very edge of the poverty line – it was the time of the great inflation – Ponc set out to explore Berlin, keeping up with all the latest trends and events that he could find. He attended all the conservatory courses, investigated Hába’s microtonal music, became interested in expressionism and constructivism, in experiments in the fields of sound and colour (‘music for the eyes’), and studied the cultures of the Chinese, Javanese, Siamese and others at the Museum of Ethnology.
Ponc investigated scientific composition techniques (the mathematical and geometrical elements of music) and attended many manifestations and concerts, in so far as his finances allowed. He heard Hindemith and Bartók, witnessed the ‘scandal’ recital by George Antheil, attended an Aida production with 1000 performers plus camels, as well as events run by the November Group, Melos, Bauhaus and Der Sturm (an evening with a mixed choir of adults and children from workers’ families, with a programme including quarter tone music!).
Miroslav Ponc was also involved in the visual arts, attracted for instance by the engagement of Georg Grosz and the machine-made paintings of Moholy-Nagy. He attended a course with the Bauhaus teacher Lothar Schreyer and devoted himself to designing and painting scenic images. In addition, he was crazy about the very latest technology, revelling in the launching of the zepellin RIII, but loathing the accompanying bombastic demonstration and pride of the Berlin bourgeoisie. He heard the first radio broadcasts and admired the medium because “you can eat during the dances by the Shimmy, listen to Tannhäuser in your pyjamas in bed and get all the details on the latest murders”.

In the meantime, Ponc struggled with a secret, passionate relationship with a certain Anna K. (comparable to Janácek’s relation with Mrs S.), a twelve year older singer in Pardubice who was married with two children. In 1923, deeply depressed, he felt obliged to temporarily abandon his fatherland and earn money in journalism and suchlike. But in 1924 he returned to Berlin and managed to join up with Der Sturm, taking part in a visual arts exhibition in 1927.

Although his compositions were neither performed nor published, Ponc was able to survive in Berlin until the early 1930s, even taking lessons with Arnold Schönberg. In 1932 he settled in Prague, where a full-length opera was premiered in 1935. He went on to work as a conductor (having trained with Hermann Scherchen) and a composer of music for theatre, film and radio.

The music of the young Miroslav Ponc emanates a power that is difficult to describe. It has the force of a sometimes folk music-like simplicity, of a reckless curiosity to follow new paths, and an unbridled fantasy for sound and colour. One discovers elements of an almost incompatible nature: Dadaism, expressionism and constructivism.

The Ebony Band performed a number of pieces by Ponc, including the Polydynamische Stücke op.5, a work of Mondriaan-like severity entirely focusing on dynamic differences between the instruments, while harmony and melody are of secondary importance. The Dutch premiere was received by the press as “truly avant-garde and the surprise of the evening”. The programme also included pieces for cello and piano (op.9 dating from 1927), in which Ponc has the cello play in quarter tones in the last two movements, and theatre music for Cocteau's Les mariés de la Tour Eiffel for a combination of diatonic and quarter note instruments - producing a deregulatory effect “as if gravity pulls sideways” as our recording engineer remarked.
Miroslav Ponc’s visual art can be admired in the Prague City Gallery.