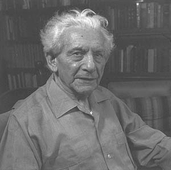 Paul Amadeus Pisk (May 16, 1893, Vienna - January 12, 1990, Los Angeles) was an Austria-born composer and musicologist. Between 1911 - 1919 he attended the Univ. of Vienna (musicology with Guido Adler) and the Vienna Conservatory (piano with A.Epstein, conducting with F.Hellmesberger and composition with F.Schreker).
He also studied privately with Arnold Schoenberg for three years.
He was chairman at the 'Volkshochschule Wien' (1922-1934) and has taught at the New Vienna Conservatory (1925-1926), the Austro-American Conservatory near Salzburg and was editor of the authoritative magazine 'Musikblätter des Anbruch' (together with Alban Berg and Paul Stefan).
Pisk emigrated to the US in 1936 and got appointments at the Universities of Redland, California (1937-1950), Texas (1950-1963) and St.Louis (since 1963).
Pisk was also one of the founders of the International Society for Contemporary Music (Salzburg 1922).