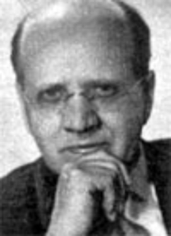 Edmund Nick (22 September 1891, Reichenberg - 11 April 1973 Geretsried) was a German composer, conductor, and music writer.
The son of a merchant, Nick studied from 1910 to 1915 law in Vienna and Graz. At the same time, he studied music at the Vienna Music Academy and at the Conservatorium Dresden. He received his doctorate in law (Dr. jur.) from the University Graz in 1918. Nick moved to Breslau in 1919, working as concert accompanist, piano teacher and critic. He became Kapellmeister of the theatre in Breslau in 1921 and Head of the Music Department of Radio Silesia (Schlesische Funkstunde A.G.) in 1924.
It was here that he first met Erich Kästner; Nick wrote the music to a radio play by Kästner which became very successful. This was the beginning of a life-long friendship.
In 1933 Nick was dismissed because he refused to divorce his Jewish wife. He moved to Berlin and became Head of Music at the 'Theater des Volkes' from 1936 to 1940.
In 1945 he moved to Munich, starting as a critic (at the Neue Zeitung). He then became Musical Director of the cabaret Die Schaubude where he continued his collaboration with Erich Kästner; eventually, he set more than 60 of Kästner's works to music.
In 1947 he became for two years chief conductor of the Bavarian State Operetta. He was made Professor in 1949 at the 'Hochschule für Musik und Theater München'; from 1952 to 1956 he was Head of the Music Department of the Westdeutscher Rundfunk in Cologne. He then worked as a music critic for the paper Die Welt, and since 1962 for the Süddeutsche Zeitung.
He wrote piano works, chamber music, film scores, and music for theatre and radio plays; he is mostly known for his musical comedies and operettas.
Nick struggled with Hitler's Nazism. At first he displayed courage by supporting his Jewish wife and worked together with left-wing author Erich Kästner, but during the war he accepted a commission from the Nazi's to write alternative stagemusic to Shakespeare's 'Midsummernights Dream', since the music of Mendelssohn was banned.