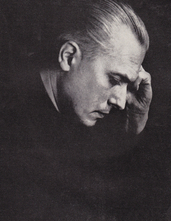 Henrik Neugeboren (6 March 1901, Kronstadt -12 January 1959, Paris) is better known in France as painter Henri Nouveau, his artist name. He was born in Transsylvania, a historical region in the central part of Romania.
Neugeboren studied at the Berlin’s Musik Akademie between 1922 and 24 with Paul Juon and Ferruccio Busoni, 1925-1927 in Paris with Nadia Boulanger, and visited Dessau’s Bauhaus workshops on several occasions starting 1926.
From 1929 on, Neugeboren lived permanently in Paris. His first exposition in Paris took place in 1930 on Theo van Doesburg's initiative.
In 1946 Francis Picabia invited him to show his works on an exposition in 1946.
In the beginning (1920s), he painted non-figurative, later - after a short period of Surrealism - abstract-geometric. He earned an international reputation with expositions in the 'Stedelijk Museum' of Amsterdam (1961) and a special exhibition in 'Musée Picasso in Antibes (1989).
His music (mostly chambermusic) remained unpublished and unplayed. A Trio for Pno. Vl. and Vc. was played at the ISCM Festival in Florence in 1934.
A wild and smashing pianopiece, a bit in the style of George Antheil, played by Gerard Bouwhuis, was recorded on the Ebony Band cd '10 Years Ebony Band'.
W.H.