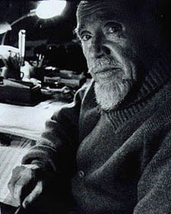 Conlon Nancarrow (October 27, 1912 – August 10, 1997) was an American-born composer who lived and worked in Mexico for most of his life. He became a Mexican citizen in 1955. Nancarrow is best remembered for his pieces for the player piano, being one of the first composers to use auto-playing musical instruments, realising their potential to play far beyond human performance ability.
He lived most of his life in relative isolation, and did not become widely known until the 1980s. He played trumpet in a jazz band in his youth, before studying music first in Cincinnati, Ohio and later in Boston, Massachusetts with Roger Sessions, Walter Piston and Nicolas Slonimsky. He met Arnold Schoenberg during that composer's brief stay in Boston in 1933. In Boston, Nancarrow joined the Communist Party. When the Spanish Civil War broke out, he traveled to Spain to join the Abraham Lincoln Brigade in fighting against Francisco Franco. He was interned by the French at the Gurs internment camp in 1939.
Upon his return to the United States in 1939, he learned that his Brigade colleagues were finding it difficult to renew their U.S. passports. After spending some time in New York City, Nancarrow moved in 1940 to Mexico, in order to escape similar harassment. He visited the United States briefly in 1947 but became a Mexican citizen in 1956.
His next appearance in the U.S. was in San Francisco for the New Music America festival in 1981. He traveled regularly in the following years. In 1985, he consulted a lawyer about the possibility of returning to his native country, but he was told that he would have to sign a statement swearing that he had been "young and foolish" when he embraced Communism, which he refused to do. Consequently, he continued living in Las Águilas, Mexico City, until his death at age 84. Though he had a few friends among Mexican composers, he was largely ignored by the Mexican musical establishment, but thanks to people like John Cage, György Ligeti and the choreographer Merce Cunningham (who arranged a few of his Studies for ballet), Nancarrows name started to establish from 1960 on. Nancarrow benefited from the 1969 release of an entire album of his work by Columbia Records as part of a brief flirtation of the label's classical division with modern avant-garde music.
In 1976-77, Peter Garland began publishing Nancarrow's scores in his Soundings journal, and Charles Amirkhanian began releasing recordings of the player piano works on the 1750 Arch label.
Thus, at age 65, Nancarrow started coming to wide public attention. He became even better known in the 1980s and was lauded by many, including György Ligeti, as one of the most significant composers of the century. In 1982, he received a MacArthur Award which paid him $300,000 over 5 years. This increased interest in his work prompted him to write for conventional instruments, and he composed several works for small ensembles.
His Studies for Player Piano were arranged for conventional instruments by Yvar Mikashoff and played by renowned ensembles such as the Netherlands Wind Ensemble and the German Ensemble Modern.
The complete contents of Nancarrow's studio, including the player piano rolls, the instruments, the libraries, and other documents and objects, are now in the Paul Sacher Foundation in Basel.
The Germans Jürgen Hocker and Wolfgang Heisig are the current live performers of Nancarrow's rolls using similar acoustic instruments. Other performers of his works (often in arrangement for live musicians) include Thomas Adès, Alarm Will Sound and ensemble Calefax from the Netherlands who also recorded the Studies for player piano, already called 'Best CD of 2009' by Dutch newspaper Het Parool.
American clarinetist and composer Evan Ziporyn has adapted a number of Nancarrow's player piano studies for the Bang on a Can All-Stars to perform live. Nancarrow was married to Annette Margolis (Margolis' grandson is writer Bret Stephens).
Wikipedia/WH