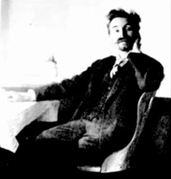 Gerhart Münch (23 March 1907 in Dresden - December 1988 in Tacámbaro, Michoacán, Mexiko), German pianist and composer, child prodigy, became his first pianolessons from his father, composer and teacher Ernst Robert Münch. He graduated from the conservatory of Dresden.
Mid 1920s, Münch was attached to the Bauhaus in Weimar as pianist/composer. He composed, a.o., incidental music to Oskar Schlemmer's Reflektorische Kabinett.
He travelled to Italy and France and stayed during the 1930s mostly in Rapallo (It.). He accompanied violinist Olga Rudge, mistress of Ezra Pound and friend of George Antheil, who's wild violinsonatas she premiered.
In 1937 Münch married in Naples the American poet Vera Lawson.
Between 1940 - 1944 Münch he fulfilled military service in the German army.
In 1947 he emigrated to California and from there, 1953, to Mexico.