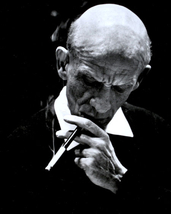 Dimitri Mitropoulos (Athens 1896 – Milan 1960) is considered one of the great conductors of all time, although he led the Royal Concertgebouworchestra only once (in 1958, with Glenn Gould as soloist).
After studying during the 1920s in Brussels and Berlin (a.o. with Busoni and Kleiber), he returned to Athens, conducting and teaching at the conservatory.
1930 was the year of his international break through: he had to stand in at the very last moment with the Berlin Philharmonic, both conducting and playing Prokofjev's Third Pianoconcerto.
In 1936 he made his debut in the US (Boston) and became Ormandy's successor in Minneapolis the following year.
At the height of his fame, Mitropoulos became chief-conductor of the New York Philharmonic. He held this position with great authority and courage by programming less wellknown or trendy composers like Mahler, Berg, Krenek or Sjostakovitch.
In 1958 he was succeeded by his protégé Leonard Bernstein.
Like his collegue George Szell, Mitropoulos, in his early years, was also a composer.
But unlike Szell, his works (chambermusic, works for orchestra, incidental music) are adventurous and original, notably the Dance of the Fauns for string quartet and the symphonic poem The Burial.