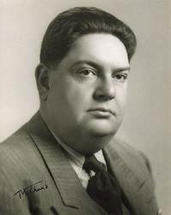 Darius Milhaud (4 September 1892 – 22 June 1974) was a French composer and teacher, born in Marseilles to a Jewish family from Aix-en-Provence. He began as a violinist, later turning to composition instead. Milhaud studied in Paris at the Paris Conservatory where he met his fellow group members Arthur Honegger and Germaine Tailleferre. He studied composition under Charles Widor and harmony and counterpoint with André Gedalge. He also studied privately with Vincent d'Indy.

Milhaud travelled across several continents at an early age. In 1917-19, as secretary to the writer Paul Claudel, who had been appointed French ambassador in Brazil, he became acquainted with Latin America. He subsequently made several trips to the United States, where he was enchanted by the authentic jazz he heard in countless Harlem clubs, bars and cafés. He returned to Europe with records issued by Black Swan (the only label to feature black bands). In London shortly afterwards, Milhaud heard Billy Arnold’s (white) American Novelty Jazz Band. He assimilated all these impressions in his music, culminating in La Creation du Monde.

After his opera Christoph Colomb had been severely criticised by the Nazi press after the premiere in Germany in 1930, Milhaud was a warned man. Shortly after the Germans occupied Paris, he left his fatherland and was fortunate enough to flee to the USA via Lisbon. His house in Paris was ransacked, and all his personal possessions taken away or destroyed. Fortunately, most of his manuscripts were already in safekeeping. Many of the composer’s Jewish family and friends did not survive the war.

Darius Milhaud was very prolific and composed for a wide range of genres. His opus list ended at 443.