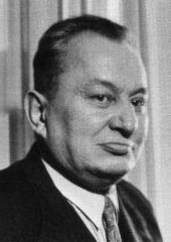 Aarre Merikanto (Helsinki, 29 juni 1893 - Helsinki, 29 september 1958) was a Finnish composer. He was the son of Liisa Häyrynen and the famous romantic composer, professor Oskar Merikanto.
His childhood he spent in Vilppula, Finland. From year 1919, he was married to Meri Grönmark. He is considered a key figure in early Finnish modernism (together with Väinö Raitio and Ernest Pingoud) and several of his works, most notably the opera Juha, have obtained posthumous attention.
As professor of composition in the Sibelius Academy (1951-1958) Merikanto taught several Finnish composers of the next generation, including Einojuhani Rautavaara, Usko Meriläinen, Aulis Sallinen and Paavo Heininen.
He studied music in Helsinki 1911, Leipzig 1912–1914 (Max Reger) and Moscow 1916–1917 (Sergei Vasilenko). Merikanto's early style was rooted in Finnish romanticism, but in the 1920s he developed a personal, atonal but not dodecaphonic Modernist style. The reception of Merikanto's works of this period was mixed: the "Schott" Concerto for nine instruments was awarded in a competition organized by the German publishers Schott & Söhne, but his domestic Finnish audiences and critics were generally unenthusiastic and his opera Juha, today considered one of his major works, was never performed during Merikanto's lifetime.
Disappointed with the reactions, starting in the early 1930s, Merikanto gradually abandoned his more radical style and turned towards a more traditional idiom based on Neoclassicism. He also destroyed or mutilated the scores of several works from his earlier style period, some of which were later reconstructed by his composition student Paavo Heininen. Merikanto was diagnosed with lung cancer in the summer 1957, and he died the next year. His son is the sculptor Ukri Merikanto.