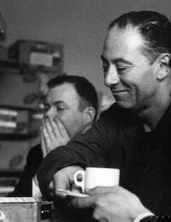 René Leibowitz (17 February 1913 – 29 August 1972) was a French composer, conductor, music theorist and teacher born in Warsaw, Poland.
During the early 1930s, Leibowitz studied composition and orchestration with Maurice Ravel in Paris, where he was introduced to Arnold Schoenberg's Twelve-note technique by the German pianist and composer Erich Itor Kahn. He subsequently studied with Schoenberg's pupil Anton Webern. Many of the works of the Second Viennese School were first heard in France at the International Festival of Chamber Music established by Leibowitz in Paris in 1947. Leibowitz was highly influential in establishing the reputation of the Second Viennese School, both through activity as a teacher in Paris after WWII and through his book Schoenberg et son ecole, published in 1947 and translated by Dika Newlin as 'Schoenberg and his School' (US and UK editions 1949). This was among the earliest theoretical treatises written on Schoenberg's 12-tone method of composition.
Leibowitz's advocacy of the Schoenberg school was taken further by his two most gifted pupils, each taking different paths in promoting the musics of Schoenberg, Webern and the development of serialism, namely Pierre Boulez and Jacques-Louis Monod. His American students include the composers Will Ogdon, Janet Maguire, and the avant-garde film director-animator John Whitney.
As conductor, Leibowitz was active in many recording projects. One of the most widely circulated and most notable is a set of the Beethoven symphonies made for Reader's Digest Recordings; it was apparently the first recording of the symphonies to follow Beethoven's original metronome markings. In choosing this approach, Leibowitz was influenced by his friend and colleague Rudolf Kolisch. Leibowitz likewise made many recordings for Reader's Digest in their various compilation albums.
He also wrote for 'Les Temps modernes', applying existentialist ideas to musicology.