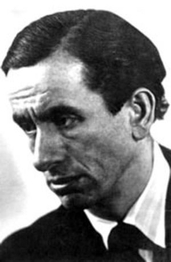 Hans Krása (30 November 1899 – 17 October 1944) was a Czech composer, murdered during the Holocaust at Auschwitz. He helped to organize cultural life in Theresienstadt concentration camp.
Krása was born in Prague to a Czech father who was a lawyer, and a German Jewish mother. He studied both the piano and violin as a child and went on to study composition at the German Music Academy in Prague. After graduating, he went on to become a répétiteur at the 'Neues Deutsches Theater', where he met the composer and conductor Alexander Zemlinsky, who had a major influence on Krása's career.
In 1927 he followed Zemlinsky to Berlin, where he was introduced to Albert Roussel. Krása, whose primary influences were Mahler, Schoenberg and Zemlinsky, also felt an affinity with French music, especially the group of composers known as 'Les Six' and made a number of trips to France to study under Roussel whilst he lived in Berlin. Krása eventually returned, homesick, to Prague to resume his old job as a répétiteur at the Neues Deutsches Theater. His debut as a composer came with his Four Orchestral Songs op. 1, based on the Galgenlieder (Gallows Songs) of Christian Morgenstern. The work was first performed under Zemlinsky's direction in Prague in May 1921 and was widely acclaimed. There followed a string quartet, a set of Five Songs for voice and piano and his Symphonie für kleines Orchester, which was performed in Zurich, Paris and Boston.
His major achievement, however, was the opera Verlobung im Traum (Betrothal in a Dream) after the novel Uncle's Dream by Dostoyevsky. This work was first performed at the Neues Deutsches Theater in Prague in 1933 under Georg Szell and was awarded the Czechoslovak State Prize.
Brundibár, a children's opera based on a play by Aristophanes, was the last work Krása completed before he was arrested by the Nazis on 10 August 1942. Krása was sent to the Theresienstadt ghetto where he reworked Brundibár for the available forces, which was then performed 55 times in the camp and also features in the infamous propaganda film made for the Red Cross in 1944.
While he was interned in the ghetto, Krása was at his most productive, producing a number of chamber works, although due to the circumstances, some of these have not survived. Along with fellow composers Viktor Ullmann, Pavel Haas and Gideon Klein, Krása was taken to Auschwitz. He was murdered on 17 October 1944; he was not yet 45 years old.