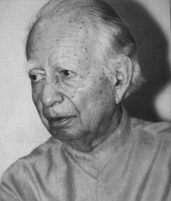 Hans-Joachim Koellreutter (2 September 1915, Freiburg, Germany – 13 September 2005, São Paulo, Brazil) was a composer, teacher and musicologist.
He studied composition, conducting, flute and musicology in Berlin and moved to Switzerland for a short time in 1937, where he studied with Marcel Moyse (flute) and Hermann Scherchen (conducting).
He lived in Brazil from 1937 and there became one of the most influential figures in the Brasilien musical world. He worked as a teacher and organised the society 'Música Viva'.