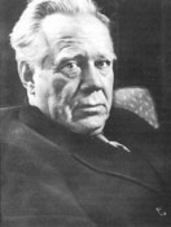 Paul Kletzki (21 March 1900 – 5 March 1973) was a Polish conductor and composer.
Born Paweł Klecki in Łódź, Poland, he later adopted the German spelling Paul Kletzki. He joined its Philharmonic Orchestra at the age of fifteen. After serving in the First World War, he studied philosophy at the University of Warsaw before moving to Berlin in 1921 to continue his studies. During the 1920s his compositions were championed by Arturo Toscanini and Wilhelm Furtwängler, who permitted Kletzki in 1932 to conduct the Berlin Philharmonic Orchestra.
Because he was Jewish, he left Nazi Germany in 1933 and moved to Italy, however due to the anti-semitism of the Italian Fascist regime he moved to the Soviet Union in 1936 but had to flee during Stalin's Great Terror and went to live in Switzerland.
Kletzki's most notable work is his Third Symphony, completed in October 1939, with the subtitle 'In memoriam'. It is an elegiac work interpreted as a moving monument to the victims of Nazism. Other works include two string quartets, a Sinfonietta for strings, a Fantasy for piano, and a sonata for violin and piano.
From 1942 onwards Kletzki wrote no more compositions; he argued that Nazism had destroyed his spirit and his will to compose. During the Holocaust a number of Kletzki's family were murdered by the Nazis including his parents and his sister.
In the post-war years Kletzki was a renowned conductor, especially of Mahler. In 1954 he was appointed chief conductor of the Liverpool Philharmonic Orchestra. Between 1958 and 1961 he was principal conductor of the Dallas Symphony Orchestra. From 1966 until 1970 he was the General Music Director of the Orchestre de la Suisse Romande.In Amsterdam he conucted the Concertgebouworchestra between 1947-1961.

That Kletzki’s compositions were no longer performed after the war is largely explained  by the fact that twenty-nine of his works were confiscated by the Nazis and destroyed, while others disappeared without a trace.
Not until more than twenty-five years after an allied bomb attack on Milan was a case bearing Kletzki’s name dug up at a building site, containing well-preserved scores including that of the Octet op. 28.
Kletzki wrote in a moderately modern style based on tradition, in which melodic invention, skilful instrumentation and logical musical development bear witness to the fact that he was more than a Sunday composer.