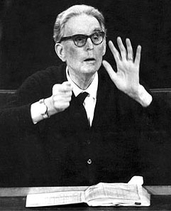 Klemperer is less well known as a composer, but like other famous conductors such as Furtwangler, Walter and Markevich, he wrote a number of pieces, including six symphonies (only the first two published), a Mass, nine string quartets, many lieder and the opera Das Ziel. He tried at times to get his works performed, as he had hopes of being remembered as a composer as well as a conductor, but had little success. They have generally fallen into neglect since his death, although some symphonic works have received the occasional commercial recording. Four string quartets and a selection of piano pieces and songs have been recorded in two limited edition CDs.
Wikipedia