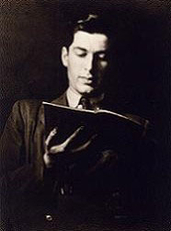 Gideon Klein (6 December 1919 – c. January 1945) was a Czech pianist and composer, born into a Moravian Jewish family in Přerov and, showing musical talent early, studied piano with Růžena Kurzová and Vilém Kurz, and composition with Alois Hába (in 1939–1940).
In December 1941 he was deported by the Nazis to Terezín concentration camp, where along with Leoš Janáček's pupil Pavel Haas, Hans Krása, and Schoenberg's pupil Viktor Ullmann he became one of the major composers in that camp, one of the few in which artistic activity occurred on any scale.
His works from these years include music for string quartet (similar in tone to Berg's opus 3 work), a string trio, and a piano sonata among others. Klein performed also as solo pianist at least on 15 recitals and he participated also in chamber music performances (member of piano trio, piano quartet).
He was deported to Auschwitz and then to Fürstengrube in October 1944, less than two weeks after completing his string trio.
He died under unclear circumstances during liquidation of the Fürstengrube camp in January 1945.
His work was influenced by Alois Hába, Alban Berg, and particularly by Leoš Janáček. He used melody from Janáček's Zápisník zmizelého as a theme in his Divertimento (1940).