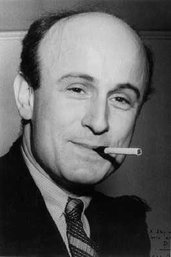 Erich Itor Kahn (23 July 1905 - 5 March 1956) was a German composer of Jewish descent, who emigrated to the United States during the years of National Socialism.
He was born in Rimbach in the Odenwald, the son of Leopold Kahn, a mathematician and synagogue cantor. He studied piano and composition at the Hoch Conservatory in Frankfurt, where his teachers included Paul Franzen and Bernhard Sekles; he concluded his studies in 1928, although he had been giving public recitals of classical and contemporary repertoire since 1919. He then worked for Radio Frankfurt as a pianist, harpsichordist, composer and arranger, reporting to Hans Rosbaud, director of the Radio's music department. In this capacity he met many leading contemporary composers (a.o. Schoenberg) and became close friends with fellow-composers Matyas Seiber, Paul Hindemith and Erich Schmid (who became a wellknown conductor).
On 29 January 1930 Kahn gave the world premiere of the Piano Piece op. 33a by Arnold Schoenberg.
In April 1933 he was dismissed from his post by the Nazis and emigrated to Paris with his wife Frida (née Rabinowitch). There he became friendly with René Leibowitz, to whom he introduced Schoenberg's Twelve-note technique.
At the beginning of World War II he was interned as an enemy alien at the 'Camp des Milles' in the southeastern France; although in May 1941 Kahn and his wife were permitted to emigrate to the United States. He worked as a pianist and teacher in New York. He founded the Albenar Trio with Alexander Schneider and Benar Heifetz, with whom he made many recordings.
In spite of some performances of his compositions by wellknown conductors like Jascha Horenstein, Hans Rosbaud or René Leibowitz, his works remain unknown.
The Ebony Band played several of his compositions. Kahn's musical heritage is cotrolled by the New York Public Library.