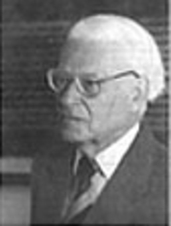 Rodolfo (Rudolph) Holzmann (* 27 November 1910 in Breslau; † 3 April 1992 in Lima) was a German-Peruvian composer, teacher and musicologist. After breaking off medicine studies he moved to Berlin in 1931 and took composition lessons with Vladimir Vogel. He also studied orchestral conducting (with Robert Robitschek) and piano (with Winfried Wolf).
Less than two years later, Hitler came to power: Holzmann's budding career in Berlin came to an early end and he sought refuge in Paris.
In 1934, Holzmann's Suite a tre temi was performed at the ISCM Festival in Florence. In the following years he roamed across western Europe, studying in London, Paris (film music with the German emigrant Karel Rathaus), Zürich (oboe) and Strasbourg (orchestral conducting with Hermann Scherchen). Scherchen encouraged his pupil to submit a work for the Henri-le-Boeuf Prize in Brussels. The jury, comprising Honegger, Roussel and Scherchen himself, awarded a prize to Holzmann for his Septuor, which was subsequently premiered in Brussels under Scherchen.
In 1938 Holzmann took up a post to teach the oboe in Lima (Peru) at the 'Academia Nacional de Música Alcedo' (the former 'Conservatorio Nacional'), and as a violinist he joined the newly established 'Orquesta Sinfónica Nacional'; he taught composition at the same conservatory from 1945.
Until the end of his life Holzmann devoted himself intensively to the study and publication of Peruvian folk music. He spent his later years in Huánuco, working as a choral conductor and as director and teacher at the 'Escuela Regional de Música Daniel Alomía Robles'.