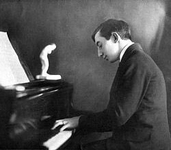 Werner Richard Heymann (1896 Königsberg – 1961 Munich) was active as a classical composer in Berlin from 1912. By the end of the decade, he also wrote songs for cabaret and served as musical director for Max Reinhardt from 1918 to 1919. In films with Ufa from 1923, he initially worked as assistant to the head of the music department Erno Rapee, before replacing the latter in 1926. Heyman remained under contract until 1933 as musical director and composer, scoring several classic films for F.W. Murnau and Fritz Lang. He also established himself as among the foremost writers of songs for film operetta, penning hits for popular fare like Le chemin du paradis (1930) and Bombes sur Monte-Carlo (1931).
Forced to flee from Nazi persecution because of his Jewish background, Heymann made his way to Hollywood via Paris and London. There, he was noted particularly for scoring two of Ernst Lubitsch's best films: Ninotchka (1939) and Jeux dangereux (1942). Heyman returned to Germany in 1951, where he resumed writing film scores and songs for the theatre until his death in 1961.