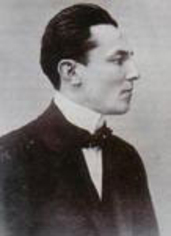 Josef Mattias Hauer (March 19, 1883 – September 22, 1959) was an Austrian composer and music theorist. He is most famous for developing, independent of and a year or two before Arnold Schoenberg, a method for composing with all 12 notes of the chromatic scale.
Hauer "detested all art that expressed ideas, programmes or feelings," instead believing that it was "essential...to raise music to its highest...level," a, "purely spiritual, supersensual music composed according to impersonal rules," and many of his compositions reflect this in their direct, often athematic, 'cerebral' approach (for example Nomos, see image at twelve-tone technique).
His twelve-tone music was balanced between the "obligatory rule" that each composition follow an arrangement of the total chromatic: "the 'Constellation' or "Grundgestalt' ('basic shape')," and his often emphasized concept of tropes, or unordered arrangement of a pair of hexachords
Hauer was born in Wiener Neustadt and died in Vienna. He had an early musical training in zither, cello, choral conducting, and organ, but evidently did not include theory and composition, for he claimed that he was self-taught. In 1918 he published his first work on music theory (a tone-color theory based on Goethe's), and in August 1919 discovered his "law of the twelve tones", requiring that all twelve chromatic notes be sounded before any is repeated. This he developed and first articulated theoretically in Vom Wesen der Musikalischen (1920), before Schoenberg’s earliest writings on twelve-tone technique. Hauer's compositional techniques of composition are extraordinarily various and range from building-block techniques to methods using a chord series that is generated out of the twelve-tone row ("Melos"). In fact, his compositional techniques change almost from each piece to the next. The so-called 44 "tropes" and their compositional usage ("trope-technique") are essential to Hauer's twelve-tone techniques. In contrast to a twelve-tone row that contains a fixed succession of twelve tones, a trope consists of two complementary hexachords in which there is no fixed tone sequence. The tropes are used for structural and intervallic views on the twelve-tone system. Every trope offers certain symmetries that can be used by the composer.
Hauer wrote prolifically, both music and prose describing his methods, until 1938, when his music was added by the Nazis to the touring "degenerate art" (Entartete Kunst) exhibit[4]Wisely keeping a low profile, he stayed in Austria through the war, publishing nothing; but even after the war he published little more, although he probably wrote several hundreds of pieces which remain in manuscript.
From the 1920s Hauer has been a model for literature several times, e.g., in Otto Stoessl's "Die Sonnenmelodie", Franz Werfel's "Verdi" (Matthias Fischboeck). Late in life Hauer spoke about Mann, as well as Theodor W. Adorno, with great bitterness, for he felt that both men had misunderstood him. Adorno had written about Hauer, but only disparagingly. Because of his later achievements and developments it has also been assumed by many scholars that Hauer is also a model for the "Joculator Basiliensis" in Hermann Hesse's "Glass-bead Game".
After 1940, Hauer wrote exclusively Zwölftonspiele ("Twelve-tone Games" or "Twelve-tone Playing"), designated sometimes by number, sometimes by date; he wrote about one thousand such pieces, most of them lost.