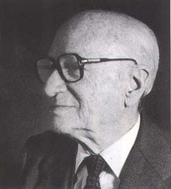 Rodolfo Halffter Escriche (Madrid, October 20, 1900 – Mexico, October 14, 1987) was a Spanish composer. Born into a family of musicians, he was the brother of Ernesto Halffter and uncle of Cristóbal Halffter, also composers. His father Ernesto Halffter Hein came from Königsberg, Germany. His mother was a Catalan who taught the first music lessons to her children.
Rodolfo Hallfter was self-taught and in the 1930s took part in the intellectual environment of Madrid, particularly in the composers' society "Grupo de los Ocho" or "Grupo de Madrid". This group was influenced by Spanish musician Adolfo Salazar (1890-1958), who encouraged them to innovate and introduced them to the avant-garde music of the time, including the works of Debussy, Schoenberg, Ravel and Bartók.
It was in this period that Halffter wrote the majority of his most important works, and at the same time he worked as a music critic in 'La Voz' as well as in the propaganda ministry of the Republican government (as compared to his brother Ernesto, who supported Franco). Because of this relationship, he went into exile in Mexico at the end of the Spanish Civil War.
In Mexico he taught in the National Conservatory and was director of Ediciones Mexicanas de Música. He never quit composing and always kept the influence of the "Grupo de los Ocho". His works tend to develop in a free polytonality with a classicism in a Scarlatti style. It is believed that Rodolfo Halffter brought serialism to Mexico.
Halffter returned to Spain on many occasions since 1963, teaching in Granada and Santiago de Compostela and taking part in music festivals. He was awarded Spain's highest award for composition, the Premio Nacional de Música, in 1986.