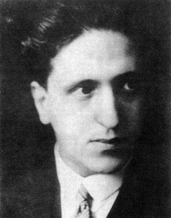 Pavel Haas was born in Brno, into a Jewish family. His father, Zikmund, a shoemaker by trade, was from the Moravian region; while his mother, Olga (née Epstein), was born in Odessa. After studying piano privately, Haas began his more formal musical education at the age of 14, and studied composition at the Brno Conservatory from 1919 to 1921 under Jan Kunc and Vilém Petrželka.
This was followed by two years of study in the master class of the noted Czech composer Leoš Janáček. Janáček was far and away Haas's most influential teacher, and Haas, in turn, proved to be Janáček's best student.
In 1935 he married Soňa Jakobson, the former wife of Russian linguist Roman Jakobson. Of the more than 50 works Haas wrote during the next two decades, only 18 were given opus numbers by the self-critical composer. While still working in his father's business, he wrote musical works of all kinds, including symphonic and choral works, lieder, chamber music, and scores for cinema and theatre. His opera, Šarlatán (The Charlatan), was first performed in Brno to sincere acclaim in April 1938.
He received the Smetana Foundation award for the opera (sharing the award with Vítězslava Kaprálová who received it for her Military Sinfonietta).
In 1941, Haas was deported to the Theresienstadt concentration camp (Terezín). He was one of several Czech-Jewish composers there, including Viktor Ullmann, Gideon Klein and Hans Krása. Prior to his arrest, he had officially divorced his wife Soňa in order that she and their young daughter would not suffer a similar fate. On his arrival, he became very depressed and had to be coaxed into composition by Gideon Klein. Haas wrote at least eight compositions in the camp, only a few of which have survived. They include a set of Four Songs on Chinese Poetry for baritone and piano, a work for men's choir titled "Al s'fod" (his first and only work in Hebrew), and the Study for String Orchestra which was premiered in Theresienstadt under the Czech conductor Karel Ančerl and is probably Haas's best-known work today. The orchestral parts were found by Ančerl after the liberation of Theresienstadt and the score was reconstructed.
In 1944 the Nazis remodeled Theresienstadt just before a visit from the Red Cross, and a propaganda film, Der Führer schenkt den Juden eine Stadt (The Führer Gives the Jews a City), was made by director Kurt Gerron, under the coercion of the camp commandant, Karl Rahm. In the film, Theresienstadt, children are seen singing Hans Krása's opera, Brundibár, and Haas can be seen taking a bow after a performance, conducted by Karel Ančerl, of his Study for Strings. When the propaganda project was over, the Nazis transferred 18,000 prisoners, including Haas and the children who had sung in Brundibár, to Auschwitz-Birkenau, where they were murdered in the gas chambers. According to the testimony of Karel Ančerl, Haas stood next to him after their arrival at Auschwitz. Doctor Mengele was about to send Ančerl to the gas chamber first, but the weakened Haas began to cough, so the death sentence was therefore chosen for him, instead. After the war Ančerl met with Haas's brother Hugo and told him the story.
Post-war Haas's large-scale symphony, which he began prior to his deportation to Theresienstadt, remained unfinished, but the surviving torso was orchestrated by Zdeněk Zouhar in 1994. Haas's music, stemming from Bohemian and Moravian roots, is sometimes tinted by Hebrew melody.
Haas has been described as "a reserved but eloquent student of Janáček" by Alex Ross in his history of classical music in the 20th century, The Rest is Noise: Listening to the Twentieth Century. His brother Hugo Haas (1901–1968) was a popular actor in pre-war Czechoslovakia.