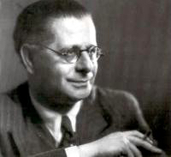 Wilhelm Grosz (August 11, 1894 – December 10, 1939) (aka Hugh Williams), Austrian composer, pianist and conductor. was born in Vienna. He studied music with Franz Schreker and Guido Adler. In 1921 he was appointed conductor of the Mannheim Opera, but returned to Vienna in 1922, where he worked as a pianist and composer. From 1927 he was the artistic manager of the Ultraphone Gramophone company in Berlin. In 1933 he became conductor of the Kammerspiele Theater in Vienna.
Forced to flee his native land because of the Nazi takeover, Grosz resettled in England in 1934. However, he found little interest there for his avant garde musical style. Luckily, he was able to apply a considerable melodic gift to setting the lyrics of popular songs, some of which became international successes. Most of his most popular titles were written with lyricist Jimmy Kennedy: "Harbour Lights," "Red Sails in the Sunset," "When Budapest Was Young," and "Isle of Capri." "Harbour Lights' was performed by a.o. Elvis Prestley, Vera Lynn and The Platters.
Grosz's classical compositions include three operas, two ballets, incidental music for three plays, scores for a number of films, orchestral works, a Symphonic Dance for piano and orchestra, chamber music, piano pieces and songs.
The 'Afrika-Songs', a song cycle for two vocal soloists and chamber ensemble, was first performed in 1930. It utilizes texts by Afro-American poets, mainly Langston Hughes, and a strongly blues-flavored sound. Both the 'Afrika-Songs' and a selection of the pop tunes, along with other of Grosz's works, were recorded in the mid-1990s by Decca Records, as part of their series called Entartete Musik (subtitled "Music Suppressed By the Third Reich").
Grosz died in 1939 in New York City due to a heart attack.

The Ebony Band performed pieces by Grosz after Werner Herbers visited his widow in the early 1980s. In her New York appartment she watched over seven boxes of manuscripts and published (but no longer obtainable) scores.
Nowadays his estate is in Vienna, in the 'exil.arte.Center'.
Besides the witty Bänkel und Balladen and the jazzy Jazzband (for violin and piano), the Ebony Band gave several performances of the 'Tanzspiel' Baby in der Bar in 2002, followed in 2004 by a semi-scenic performance of the burlesque opera Achtung, Aufnahme!!, written in 1930 (see video). The libretto of the latter two works is by Béla Bálasz, who also wrote the libretto for Bartóks Bluebeard's Castle and the scenario for the first film version of Weill's Die Dreigroschenoper (produced by Georg Wilhelm Pabst).
W.H.