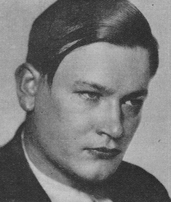 Walter Gronostay was born in Berlin in 1906. His family came from East Prussia and his ancestors were probably Polish farmers. The name Gronostay is of Mongolian origin and means 'ermine'.
Gronostay's musical upbringing included piano lessons (from the age of six), violin (from ten) and composition and orchestral conducting (from fourteen). A modest contribution towards his tuition from his needy father was supplemented by playing the violin in dance halls and giving music lessons.
At the age of seventeen Gronostay gained his conducting diploma and began to conduct theatre music and operettes. In 1926, hardly twenty years old, he was accepted by the Prussian Academy of Art for masterclasses under Arnold Schönberg, who initially assessed his very young pupil's progress as "sufficient" and later as "very good". Among the pieces composed in this period are the String Trio, performed by members of the famous Kolisch Quartet on 20 May 1927, and the short opera In zehn Minuten, first performed on 20 July 1928 at the Baden-Baden Festival.
After studying with Schönberg for two years, Gronostay devoted himself to a wide range of musical activities; besides music for the concert hall these included pioneering work in the field of film, radio and gramophone, the particular requirements of which were hardly mainstream.
In 1929 Gronostay was appointed department chief of the 'Berliner Funkstunde'. He held distinct views on the function of broadcasting in the 'Rundfunk Versuchsstelle' and wrote and lectured extensively on the medium of radio, with particular concern for broadcasting 'art music in relation to the masses' and for 'unorganised listening'. He believed that art music must be programmed for radio otherwise, and with more variation, than for the concert hall, and that text should be integrated. "A first requirement is to gain and retain the attention of the listener in order to suppress beforehand otherwise inevitable signs of fatique. Like a film, music programming on the radio must have the most wide-ranging appeal." (Gronostay in Melos, 1932). In his article "The broadcasting society is not a concert hall" he writes: "The indisturbable pianist/violinist/singer is unaware that nobody, except the competition, listens to the radio. While such a decent lad unremittingly hammers away at the piano, the loudspeakers in Berlin have long been switched off. He performs in the desert, so to speak, although wolves and foxes would perhaps listen to him there."
In the field of film music too Gronostay was a man of the first hour. He wrote music for the first sound-films (for the Dadaist, painter and film maker Hans Richter among others) and became one of the leading film composers in the 1930s. Among his best-known film scores are Lady Windemeres Fächer, Hotel Savoy 217, Sprengbagger 1010 and Totes Wasser, the latter by the Dutch film maker Gerard Rutten, with Ernst Busch in the main role and the music performed by the Concertgebouw Orchestra under Willem Mengelberg. This film was shown at the Venice Biennale.
Gronostay was in such demand that he passed some commissions on to his earlier fellow Schönberg pupil Bernd Bergel, an unemployed Jew who sought safety under the pseudonym Gronostay.
Naturally, the political developments of the time did not go unnoticed in Gronostay's life. In 1934 he was dismissed at the radio because he refused to comply with the demand to divorce his three-quarters Jewish wife Eva Schönveldt, whom he had married in 1930. He retained his post at the 'Reichsfilmkammer', being too important to be missed, and his earnings there were of vital importance to the pair. Consequently he was obliged to provide the music for several 'Blut und Boden' films by Leni Riefenstahl and others, and a fanfare for the 1936 Olympic Winter Games in Garmisch Partenkirchen. But he also enjoyed considerable freedom, and took advantage of it in Strassenmusik, for example, a film about the poet and cabaret artist Karl Valentin; Gronostay created the screenplay himself and incorporated the Internationale, which to his good fortune remained unnoticed by the Nazis.
A man of interest and appeal, Gronostay had a macabre sense of humour and an allergy for amateurism, he was a heavy drinker and chain smoker, suffered depressions and was a workaholic (although he could only work in the presence of his wife, even stopping when she let the dog out). He admired Karl Kraus and sympathised with the communists, sharing with them his hatred of the Nazis. On a postcard to his wife in 1936 he wrote: "While I sit here in the cafe, that brown pestilence parades past".
At the end of his life, considering the possibility of emigration, Gronostay sought contact with his colleague film composer Groth in Hollywood. His wife was pregnant and he desired his child to be born on an English ship in order to avoid it having the German nationality. His early death in 1937, at the age of thirty-one, brought an end to his plans; he died within six hours from an acute inflammation of the liver.
Gronostay's wife and daughter Sylvia survived the war in hiding in Austria and subsequently returned to Germany. They lugged all his musical belongings with them, to the very good fortune of the Ebony Band!

W.H.
With thanks to Sylvia Gronostay