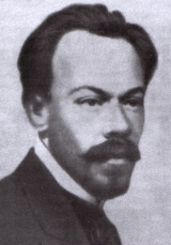 Mikhail Fabianovich Gnessin (also spelled Gnesin) was born in 1883 in Rostov, Russia, on the Don River near the Sea of Azov. After studying at the Rostov Technical Institute, Gnessin began his musical studies with Georgi Konius at the St. Petersburg Conservatory in 1899. That same year, Gnessin's four older sisters, professional musicians all, founded the Gnessin Institute of Musical Art, also at St. Petersburg.
Gnessin remained with the St. Petersburg Conservatory until 1908, taking classes under composers Nikolai Rimsky-Korsakov, Alexander Glazunov, and Anatol Lyadov. Gnessin's early Symphonic Fragment after Shelley: Prometheus Unbound, Op. 4, earned him a jury prize in 1908, and demonstrates how well Gnessin absorbed the orchestral language taught under the masters at the St. Petersburg Conservatory. Also in 1908, Gnessin became a founder member of the Jewish Folk Art Society, a group of composers and artists headed by the "Jewish Glinka," Joel Engel. Engel's group, which also included Lazare Saminsky, Alexander Krein, and Joseph Achron among others, sought to bring artistic expression to themes drawn from Jewish folklore. In hindsight, musicologists have dubbed this group the "New Jewish School." Gnessin was a major contributor to the genre, composing operas, chamber music, songs, and a few orchestral works based on Jewish melodic themes.
After a brief period studying abroad, in 1912 - 1913 Gnessin worked as a composer in the company of influential avant-garde theater director Vsevolod Meyerhold. During this time, Gnessin worked toward developing a type of musical speech composition he referred to as "musical reading" which he utilized in his operas The Maccabeans and The Youth of Abraham. Pitches and rhythms are supplied for text, but Gnessin specifies that the passages are to be "recited" rather than sung. The purpose was to relieve his operas of boring, long-winded passages of recitative. But the technique of "musical reading" could hardly avoid resulting in speech that was heavily stylized, especially when performed by the eccentric actors associated with Meyerhold.
In 1913, Gnessin settled into a teaching post in his hometown of Rostov. Around 1915, the influence of Scriabin can be detected creeping into Gnessin's work in the form of wayward transitional passages and out-of-key harmonic coloring, such as is found in the Requiem for two violins, viola, cello, and piano, Op. 11. These characteristics may be found in his works up until about 1923, when Gnessin left Rostov to join his sisters teaching at the Gnessin Institute in St. Petersburg.
In 1925, Gnessin added classes at the Moscow Conservatoire to his work regimen, and composed the only work that kept his name on Russian concert programs in later years: the Symphonic Monument: 1905-17. Based on texts of poet Sergey Yesenin, this was one of the first musical works of any kind based on the October Revolution, and a favorite concert "war horse" of the Soviet regime. As Gnessin's duties as a teacher increased, his compositions became sparser, and he composed very little after 1935. That year, Gnessin was able to transfer to the Leningrad Conservatory, where he taught until the end of the Second World War. In 1945, Gnessin was named head of the Institute already bearing his name, and remained in this post until his death at age 74 in 1957.
In Russia, Gnessin's work as an educator and as a builder of the famed Gnessin Institute is held in far higher regard than that of his compositions. However, Gnessin was a true pioneer of Jewish art music, as evidenced in such fine works as the orchestral suite The Jewish Band at the Ball in Nothingtown, Op. 41.