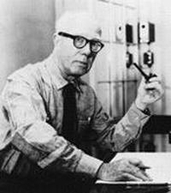 Robert Gerhard (1896 – 1970) was a Spanish Catalan composer and musical scholar and writer, generally known outside Catalonia as Roberto Gerhard.
Gerhard (who only consistently adopted the form ‘Roberto’ after he was exiled from Spain) was born in Valls, near Tarragona, Spain, the son of a German-Swiss father and an Alsatian mother. He was predisposed to an international, multilingual outlook, but by birth and culture he was a Catalan.
He studied piano with Granados and composition with the great scholar-composer Felipe Pedrell, teacher of Albéniz, Granados and Falla. When Pedrell died in 1922, Gerhard tried unsuccessfully to become a pupil of Falla and considered studying with Charles Koechlin in Paris but then approached Arnold Schoenberg, who on the strength of a few early compositions accepted him as his only Spanish pupil.
Gerhard spent several years with Schoenberg in Vienna and Berlin. Returning to Barcelona in 1928, he devoted his energies to new music through concerts and journalism, in conjunction with the flourishing literary and artistic avant-garde of Catalonia. He befriended Joan Miró and Pablo Casals, brought Schoenberg and Webern to Barcelona, and was the principal organizer of the 1936 ISCM Festival there. He also collected, edited and performed folksongs and old Spanish music from the Renaissance to the eighteenth century.
Identified with the Republican cause throughout the Spanish Civil War (as musical adviser to the Minister of Fine Arts in the Catalan Government and a member of the Republican Government's Social Music Council), Gerhard was forced to flee to France in 1939 and later that year settled in Cambridge, England. Until the death of Francisco Franco, who made it his business to extirpate Catalan national aspirations, his music was virtually proscribed in Spain, to which he never returned except for holidays.
Apart from copious work for the BBC and in the theatre, Gerhard's compositions of the 1940s were explicitly related to aspects of Spanish and Catalan culture, beginning in 1940 with a Symphony in memory of Pedrell and the first version of the ballet Don Quixote. They culminated in a masterpiece as The Duenna (a Spanish opera on an English play, by Sheridan, which is set in Spain). The Covent Garden production of Don Quixote and the BBC broadcasts of The Duenna popularized Gerhard's reputation in the UK though not in Spain.
During the 1950s, the legacy of Schoenbergian serialism, a background presence in these overtly national works, engendered an increasingly radical approach to composition which, by the 1960s, placed Gerhard firmly in the ranks of the avant-garde. From the early 1950s Gerhard suffered from a heart condition which eventually ended his life. He died in Cambridge in 1970 and is buried at the Parish of the Ascension Burial Ground in Cambridge.
Bron: wikipedia