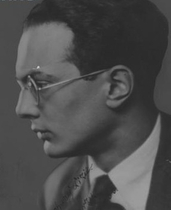 Jerzy Fitelberg (Warsaw 20 May 1903 - New York 25 April 1951) was first taught by his father Gregor, a renowned conductor, violinist and advocate of modern music. Jerzy studied with Schreker in Berlin from 1922-1926, and remained there until Hitler came to power.
Fitelberg’s music was performed in many European countries and the USA, and frequently presented at ISCM festivals (International Society for Contemporary Music): Geneva 1929, Liège 1930, Vienna 1932, Barcelona 1936, Paris 1937, Los Angeles 1941 and Frankfurt 1946/1951.


In 1933 he fled to Paris and remained there until 1939, when in May he moved to the USA and settled in New York. He became a member of the American League of Composers.


In the many boxes of music by Fitelberg that I found in the 1990s in the New York Public Library were a number of compositions written specially for the new medium of the radio which emerged in the 1920s. The inadequate quality of both microphones and speakers meant that this music had to be transparent and clear, so that there was a preference for winds and percussion above woolly strings. The Ebony Band performed some of these highly successful pieces.

The excellent Canadian ARC Ensemble released a cd, Chamberworks by Jerzy Fitelberg on the Chandos label: a perfect token of the quality of Fitelbergs composership.