Alexander Michailovich Dzegelenok (Moscow 1891 – Moscow 1969) studied piano and composition in Moscow and earnt his living primarily as a teacher and choral conductor. His unacademic composition style, sometimes influenced by both French and 'exotic' music, was considered naive. However, several of his works from the 1920s can be counted among the so-called machine music, for example movements from his orchestral work Egipet (Egypte) op. 6, written in 1928.
In the 1920s some of Dzegelenok's pieces were also issued in the West by the then remarkably progressive Russian State Publisher in collaboration with the Viennese Universal Edition. 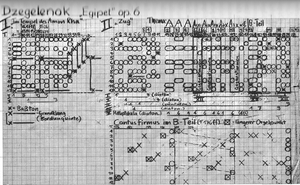