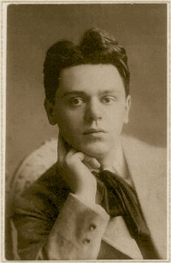 Jakob van Domselaer (15 April 1890– 5 January 1960) was a Dutch composer, who studied in Utrecht composition and piano with Johan Wagenaar. From there he went to Berlin and took lessons from Frédéric Lamond. He also got in touch with the music of Busoni and Schönberg and became among the first to perform their music in Holland (1914).
In 1912, he traveled to Paris where he met the Dutch painter Piet Mondriaan, eventually becoming a part of Mondrian's artistic circle known as "De Stijl." Domselaer's piano suite Proeven van Stijlkunst (Experiments in Artistic Style, 1913–17) represented the first attempt to apply principles of Neo-Plasticism to music. This austere, mathematically based music represents an important but as yet unacknowledged precedent to minimalism and has been little performed or recorded.From 1918 on he changed his ideas about composing, calling his music from now on 'soundpieces' in stead of compositions. A good example of this style is his Sonate nr. 9 for piano from 1924. In 1921 he wrote his First Symphony which wasn not played until 2002.
Domselaer's students have included the Dutch composers Nico Schuyt (1922–1992) and Simeon ten Holt (1923-2012).
At the Berlage Concourse in 1988, the Dutch pianist Kees Wieringa  was one of the prize winners, playing piano music by Domselaer. He released a recording featuring the music of Domselaer in 1994 (DO Records CD, DR 001).
The Ebony Band played in 1994 his Proeven van Stijlkunst, arranged for ensemble by Dutch composer Bart Visman in a program entitled 'Music for Mondriaan' and conducted by Gunther Schuller.
W.H.